Some activity ideas to help your child practice buttons 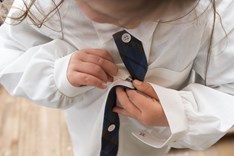 Buttons are a hard skill to master as it involves both hands working together but making slightly different movements.  Your child will not really be able to do this until after the age of 4.  Below are some activity ideas to help your child practice buttoning.

Start practicing with larger flat buttons of a contrasting colour to the clothing, gradually progressing to smaller ones.  Ensure that the button hole is large enough for the button to easily fit through (old cardigans are good for practicing on as the wool tends to have stretched after years of use, also clothing with toggles rather than buttons is easier to start with). 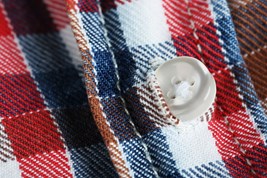 Start buttoning at the bottom of a shirt; it is easier to line up the bottom of each side of a shirt to make sure the buttons and holes are aligned correctly.  Top buttons are always more difficult to fasten, as your child can’t see what their hands are doing.  This is particularly true in school shirts as not only can your child not see the top button but the button hole is aligned in a different direction.

Limit the number of buttons a child has to do; only undo the top few buttons when taking off a shirt or blouse and then remove the garment over the head.  It can then be put on over the head the next morning and only a few buttons will need to be done up.

For further practice and activity ideas download the Button Programme.

Choose trousers or skirts with an elastic waist band if buttons and buckles are different.

Velcro can be used instead of buttons.  For example on a coat or shirt use Velcro on the back of the flap and sew buttons of the top flap so that the shirt still appears to be buttoned.

Try leaving cuff buttons done up.  Alternatively sew a piece of elastic or a button attached with elastic thread across the cuffs so that is can be stretched open when the hand is pushed through.

Use elastic thread instead of cotton to attach buttons which will allow the child to pull a shirt over his head with buttons fastened. You may have to sew the top shirt buttons and cuff buttons more loosely.