A Glasgow beauty queen has brought some spring joy to kids being treated at the Royal Hospital for Children in Glasgow. Nicole Anderson, 27, donated sweet treats, as well as toys, teddies and arts and crafts sets for the children to enjoy. It was an emotional return for Nicole, who spent much of her early life being treated in the former children’s hospital at Yorkhill. Now, Nicole is looking forward to representing her home city in the final of a national beauty pageant.

Nicole was born with congenital hip dysplasia, a condition where the ‘ball and socket’ joint of the hip does not form properly in babies and young children. Before surgery was due to go ahead, and aged just 20 months, doctors discovered a rare kidney cancer, bilateral Wilms tumours, which had to be treated first.

“I had my left kidney removed completely and half of my right one and was treated with chemotherapy,” explains Nicole.

“Once I was officially in remission I think a year or so went by and then I was back in for my different hip surgeries.”

“I know just how much the team care for the children and it’s been tough with the COVID restrictions, so I wanted to be able to do my small bit to bring a wee bit of cheer to the wards.”

Nicole has donated arts and craft sets so kids can enjoy painting and creating, as well as toys.

“I know that not all kids in hospital can eat chocolate, so it’s important that they have a treat too,” she says. 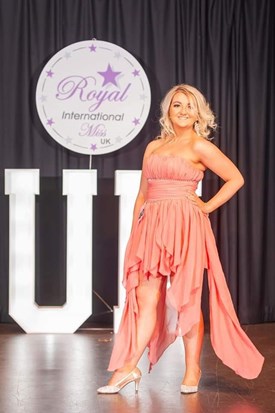 Coral McGowan, Patient Services Manager at the Royal Hospital for Children, said: “We want to thank Nicole for her most thoughtful donation. Nicole knows only too well some of the challenges our patients may face, but she’s a shining example of what can happen with a good recovery from serious illness. I really hope she brings back the crown for Glasgow and wins the pageant.”

For the last two years, Nicole has been working in recruitment, specialising in bringing doctors and nurses on to Scottish wards. Given her experience of hospitals, she says it’s great to be part of the process and she ‘absolutely loves’ helping the NHS.

Nicole will be competing at the Royal United Kingdom Miss as the Ms Royal Glasgow finalist. The final takes place in Manchester at the end of July.

Pictured: Nicole and Linda Vassie from the hospital and Nicole in competition.