The New South Glasgow Hospitals are the largest capital healthcare project in Scotland and form the keystone in NHS Greater Glasgow and Clyde’s (NHSGGC) Modernisation Strategy. The new Adult Acute Hospital and Children’s Hospital will lead the way in excellent, modern healthcare for Scotland.

New South Glasgow Hospitals is the largest capital healthcare project in the UK and forms the keystone within NHS Greater Glasgow and Clyde’s (NHSGGC) Modernisation Strategy. The hospitals provide new state of the art healthcare facilities and high quality designed environments for a significant proportion of the population of Glasgow, and in some fields, for Scotland. The project brings together Children’s and Adult Acute services with existing Maternity, Neo-natal and Neurosciences services on one campus. It has the biggest critical care complex and one of the biggest Emergency Departments in Scotlandproviding abrand new 14-floor adult hospital with 1,109 beds. The new children’s hospital, with a separate identity and entrance, adjoins the adult hospital, with 256 beds over five storeys.

Ginkgo Projects working with Gillespies (masterplanners and landscape designers) and Nightingales (architects and interior designers), were contracted by Brookfield Multiplex to develop and deliver the Therapeutic Design and Arts strategy and programme for the New South Glasgow Hospitals. The Design and Healthy Environment Stratey Group at NHSGGC has overseen the development of this programme.

Ginkgo’s evidence-based programme for the Therapeutic Design and Arts strategy has sought to enhance the patient experience and journey through developing creative processes and works of art and design that aim to connect patients, staff and visitors to the hospital’s social cultural and environmental context. Working closely within the project design team, Ginkgo Projects has developed a programme which promotes patient dignity and distraction through exploring social, cultural and environmental connections. The strategy was produced in collaboration with two artists Donald Urquhart and Will Levi Marshall. Seven core projects were commissioned resulting in over 600 individual works of art. The approach has been to integrate work that provides as much impact as possible within key navigation points, waiting and treatment areas.

Ginkgo provided a direct service for the curation, design and implementation of all projects working closely with its teams of artists and designers in close collaboration with the NHSGGC and Brookfield Multiplex project teams.

The programme is composed of seven lead projects as below:

Matthew Dalziel and Louise Scullion led a team of artists to create artworks for eight floors of the acute adult hospital (The Beacon). These occupy three types of spaces: Lift Spaces, Corridor Spaces and in the Socialisation Space / Room at the end of each corridor. Work has been coordinated in layers of artworks that look at eight broad Scottish habitats drawing the wider landscape of Scotland into the building.

Over 250 works have been produced. The project has used existing images produced by Dalziel and Scullion made over a lifetime of exploring Scotland’s diverse landscape - together with many new works made specifically for the project. Other artists include: Nickolai Globe (ceramic works for Socialisation Spaces), Patricia & Angus Macdonald (areal views of Scotland, establishing the examined habitat themes), Ursula Bevan (creation of a ‘family’ of characters that explore each of the themes – the final works being rendered as styalised lino cuts), Beka Globe (striking black & white images exploring a selection of the themes, with a particular focus on the western isles), and Frances Walker (a smaller group of works that capture Frances’ unique distillation of geology in her complex drawings of landscape). 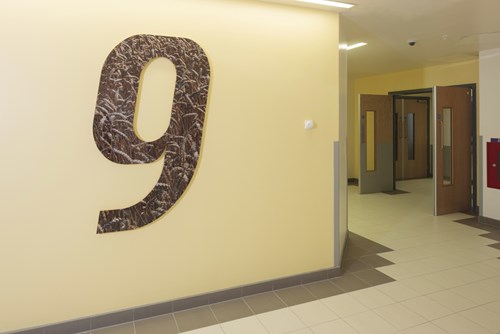 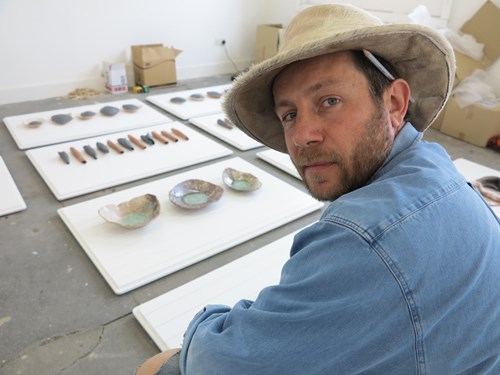 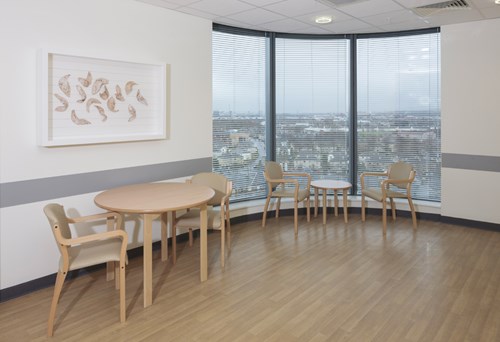 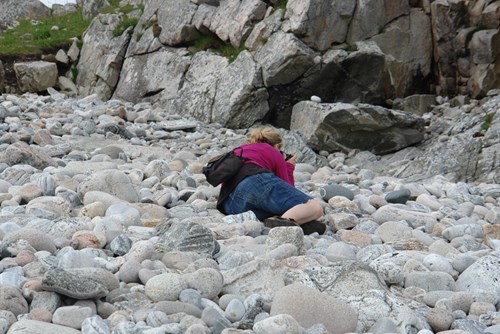 Graphical House, Haa Design and artist Rachel Mimiec designed twenty one land marks for key areas and thresholds of the podium building of the new hospital.

Rachel undertook research and workshops within the Govan community and at a number of the hospitals working with patients and staff to find out what was memorable in their journey from home to their work place.

The landmarks all have a similar style and identity composed of white Corian with the designs inset in coloured Corian. The panels wrap around a corner and are built out with a deep coloured edge to match the design.

One external landmark is composed of a grid of bold squares relating to the colours that have been used internally and references a patchwork quilt. Graphic images from the internal landmarks are woven into the external piece so that there is a connection between inside and outside. 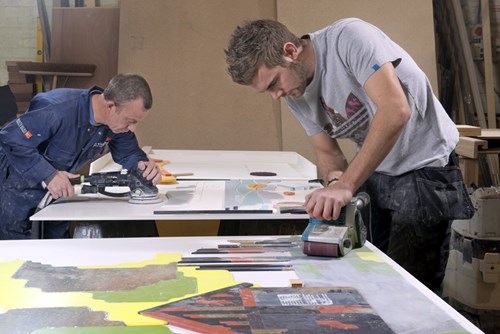 Frances Priest worked with shapes, motifs and patterns, inviting children to play with them, arrange them and imagine what they might be. She has used the drawings made by children during the residency to create a series of artworks based on four themes; circus characters, climbing characters, birds and space travel.

Ian Richards used letra set transfers, asking young people to write a sentence or phrase, building narratives by passing on one person’s writing to somebody else and asking them to respond to it. He worked with young people to digitally create a series of bold, colourful patterns based on the repetition of one motif. Ian has developed the phrases, stories and patterns created during the residency into a series of artworks combining patterned Scottish mountain ranges, tower blocks made out of bread, hot air balloons and a cast of funny bird characters!

Alison Unsworth created the Unfinished Places newspaper in collaboration with children and young people at three local schools close to the site of the new hospital. Unfinished Places is a newspaper for children and young people. It’s full of pictures which are only half finished and we asked for help to complete them by drawing, writing or sticking things in. Pages from the returned newspapers can be seen at yorkhilldrawings.com. Alison’s artwork for the new hospital is based on four themes relating to life in Glasgow and the wider Scottish landscape; wildlife, habitats, transport and buildings or structures. She selected imagery relating to these four themes and combined it together to create different scenes, influenced by a selection of ideas, drawings and stories from the returned newspapers and from artwork created by children and young people at Yorkhill.

Emma Varley worked closely with staff in the Department for Child and Family Psychiatry, considering how the images she created might be used in part to assist therapy or influence behaviour. She has created a series of artworks combining detailed line drawing with coloured shapes and graphic motifs. The artworks include familiar, domestic objects such as a toothbrush and toothpaste or a pair of shoes, alongside household furniture and friendly animals such as a cat and a fox. All of the imagery was carefully chosen in collaboration with staff in the department.

A library of over 100 designs has been created for future application as required. 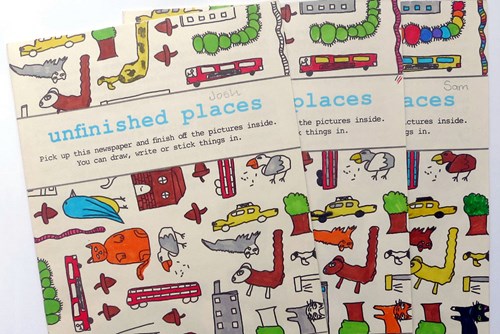 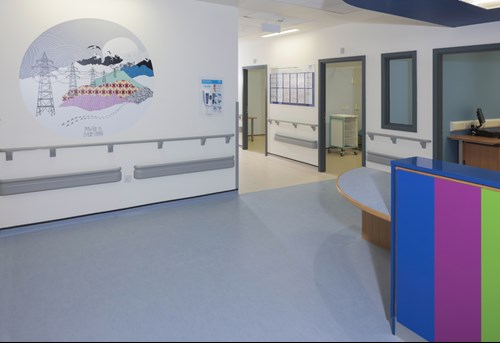 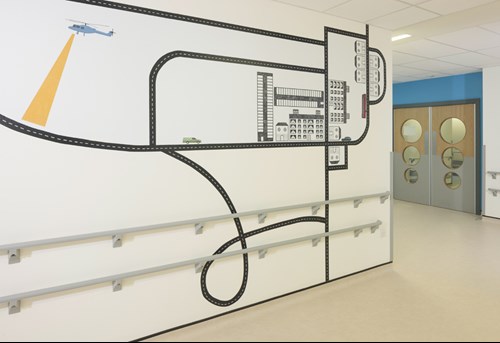 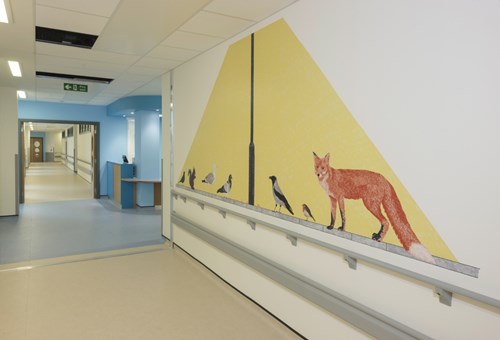 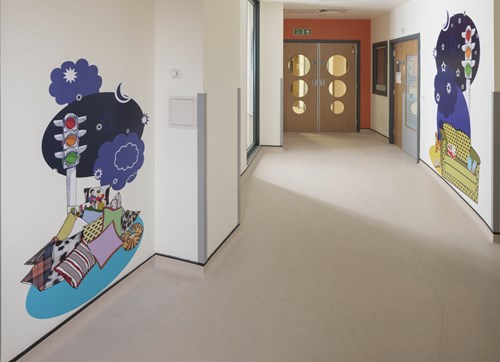 Up to eighty quiet rooms were considered and enhanced as part of the core project. The rooms are used for a range of purposes of which the most important are conversations between clinical, nursing or spiritual care staff and patients’ relatives and carers. On a practical level the rooms need to be comfortable, safe and quiet; they also need to convey that users of the rooms are being treated with dignity.

The team worked with an art and design palette, including lighting, wall colours and coverings, flooring, furniture and artworks. The project used creative community engagement strategies to inform thinking about the idea of dignity and the development of innovative approaches to interiors.

The approach was to seek connections with nature, this approach can be called biophilic design.

Hamilton and his team settled on the metaphor of walled garden to inform the design process.

To drive the biophilic design, a process of creative engagement was undertaken. The community workshops and clinical conversations involved individuals aged from four to seventy, exploring ways of considering all aspects of dignity, including how to listen, and what helps listening in clinical settings.

The workshop activity, held at Hidden Gardens, Glasgow, involved participants looking at the plants within the walled garden, selecting leaves and petals with which they made their own image using the cyanotype process. Cyanotype photography provided a direct and immediate method for image making. These pictures helped to inform the design process, wallpaper, fabric for chairs, and the overall aesthetic used in the Quiet Rooms.

Through close collaboration with Teal a unique fabric design was developed and applied to standard furniture for each of the rooms. This fabric range is now an available product within the Teal range. 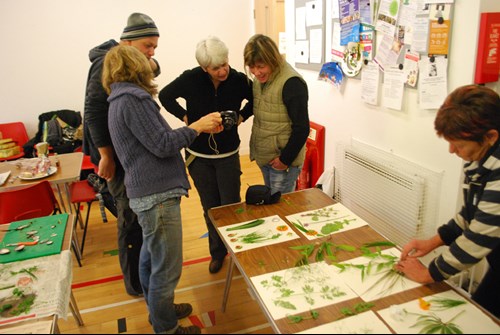 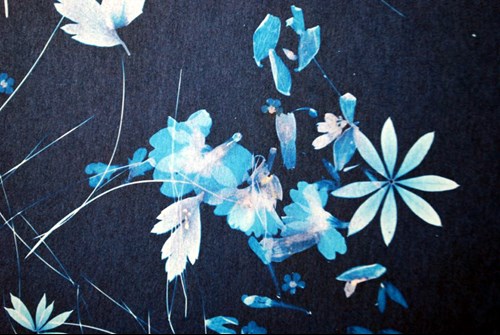 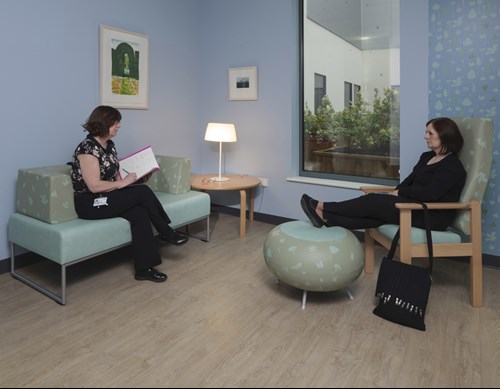 The 100 Flowers project is a response to the restriction of real flowers in acute hospitals, due to infection control measures, and is designed to put flowers back at the heart of the experience of the new hospitals.

The iconic image in the collection is a photograph taken by a member of staff. It’s of a small group of daffodils in the grounds of the Southern General. Craig Humanuth, the member of NHSGGC staff who took the photograph, commented that these are the only flowers he sees during his working day. In the background you can just make out the new Hospitals reflected in the windows of the old one.

The 100 Flowers project has produced a hundred new works of art of flowers in the New South Glasgow Hospitals in waiting rooms and departments to be enjoyed by patients, families, carers, visitors and staff alike.

It has been an opportunity for artists, staff, community groups to create new works using flowers.

The collection aims to reflect the rich diversity, not just in the flowers that can be found in and around the hospital, but the people and staff who will use and work in the new facility.

The 100 Flowers Project has been developed in partnership with Glasgow Life, the Hunterian Museum and Art Gallery and the CCA.

There will be a book published of all the works in the Collection, available for purchase in the Hospitals and in City museums, arts centres and shops. In addition NSGH Staff will be able to request that reproductions of the pictures from the 100 Flowers Collection are hung in areas that they work. 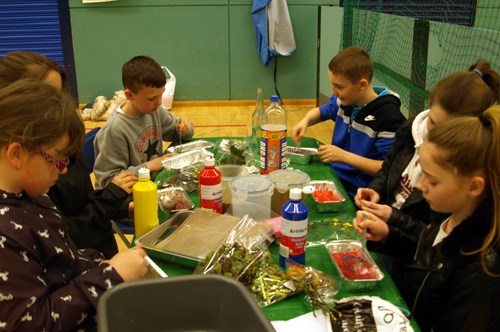 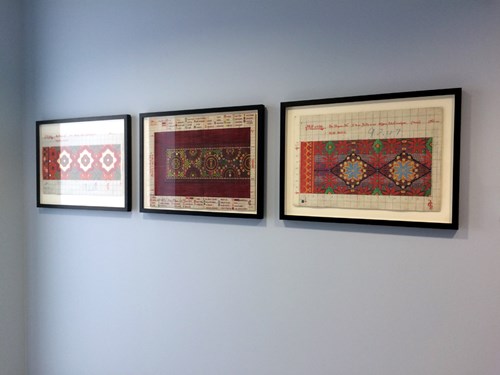 A film of the 100 Flowers Collection can be viewed below or please click on the following links to view the collection in full:

Jephson Robb and Peter Richardson of ZM Architecture have designed three Pavilions and two bicycle shelters. All the structures reinforce the external way finding strategy being placed as key landmarks.   The structures benefitted from significant additional funding from the Yorkhill Children's Charity.

When children visit the pavilion in the Children's Park they'll find a performance space where they can take the limelight. A spotlight on sensor activation will put them centre stage. Parents and carers can watch their children invent new stories or moves.

The two bike shelters and Garden and Play pavilions will be erected during 2015 with the final Orchard Pavilion planned for 2016. 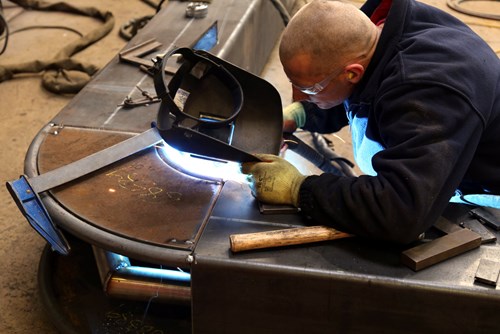 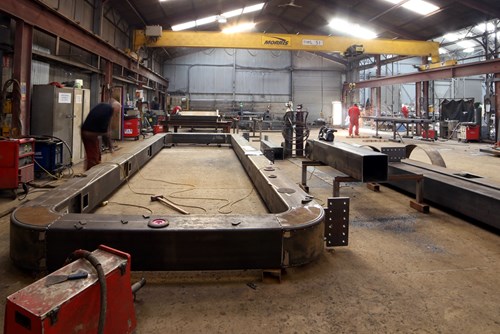 Find out more about some of our other health improvement services, resources and initiatives:

Support and Information Services in some of our acute hospitals