What is the Early Pregnancy Assessment Service (EPAS)?

An Early Pregnancy Assessment Service (EPAS) is a dedicated department within the maternity unit that provides care for women with problems in early pregnancy. The commonest reasons women are referred to the EPAS are bleeding and / or pain with a positive pregnancy test. The EPAS includes the provision of investigations such as blood tests and ultrasound scans. These tests will confirm if you are still pregnant with a continuing pregnancy or whether your pregnancy is non-continuing and you may be experiencing a pregnancy loss - Miscarriage. Once a diagnosis has been made either way the subsequent treatment options will be discussed. The EPAS will also investigate the location of a pregnancy and diagnose if a  pregnancy is an Ectopic pregnancy (pregnancy is developing out-with the womb) and advise on the appropriate management.

How do I get seen in the Early Pregnancy Assessment Service?
Usually you will be referred to the EPAS by your midwife or GP or via the emergency department. The main reason for referral is to check the health of a pregnancy following an episode of pain or bleeding.

Bleeding is a common symptom in early pregnancy. You might get some harmless light bleeding, called "spotting’. This is when the developing embryo implants itself in the wall of your womb. This type of bleeding often happens around the time your period would have been due. Pregnancy can cause changes to the cervix, and this may sometimes cause bleeding – after sex, for example. During the first 12 weeks of pregnancy, vaginal bleeding can be a sign of a Miscarriage or an Ectopic pregnancy. However, many women who bleed at this stage of pregnancy go on to have normal and successful pregnancies.

You should let your midwife or GP know if you experience bleeding and they will advise you whether you require to be seen by the EPAS. A small number of women may be asked to self refer to EPAS at the direction of their healthcare professional based on increased risk factors and or previous history. If this relates to you, you will be given the contact details.

How soon will I be seen by the Early Pregnancy Assessment Service?
An appointment will be allocated within 48 hours as this may be the optimum time to have an ultrasound scan. sometimes it is simply too early in the pregnancy or in your condition to give you a definite answer. For example, it may possible to see a pregnancy on a scan, but it might be too early to see a heartbeat).

A miscarriage and other terms for the early loss of pregnancy include:

Causes
Most miscarriages are caused by chromosome problems that make it impossible for the baby to develop. In rare cases, these problems are related to the mother's or father's genes.

Other possible causes of miscarriage may include:

Around half of all fertilized eggs die and are lost spontaneously, usually before the woman knows she is pregnant. Among women who know they are pregnant, unfortunately 1:4 will result in miscarriage. The rate of miscarriage drops after the baby's heartbeat is detected, however in a small number of pregnancies miscarriages can still occur.

The risk of miscarriage is higher:

How is a miscarriage diagnosed?
If you have vaginal bleeding with or without pain you should tell your GP or midwife in order that it can be investigated. This may involve getting a series of bloods taken and /or an ultrasound scan. It can be difficult in early pregnancy to know if a pregnancy is continuing or not. You may therefore require more than one visit to the early pregnancy assessment service. The information on the chart below should help you understand how we use the size of the embryo (the developing baby up to 8 completed weeks gestation) and fetus (the developing baby from 9 weeks until birth), blood tests and ultrasound scan to reach a diagnosis. The midwife in the early pregnancy service can advise you if you have any questions. Most miscarriages occur during the first 12 weeks (3 months) of pregnancy and, sadly, most cannot be prevented.

The value of tests such as a scan and blood tests 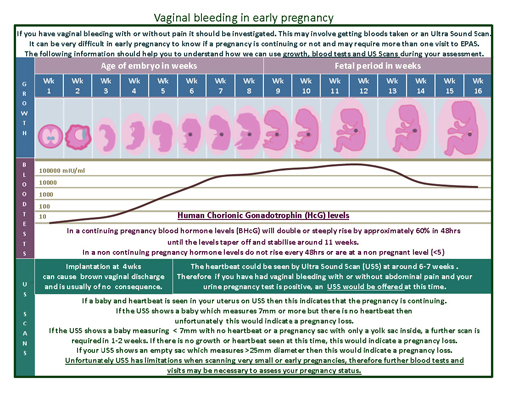 Please click on the diagram above to view in a larger format.

It is important to remember that blood tests or a scan will not change the outcome of your pregnancy but will give information on whether your pregnancy is continuing or not. However this may require more than one visit to the early pregnancy assessment unit before a diagnosis can be confirmed. There are also scan limitations when scanning very small/early pregnancies.

At around 4 weeks gestation there can be some brown vaginal discharge caused by the pregnancy embedding into the lining of the uterus (womb.) This is called an implantation bleed and is normal and would not require any further investigation unless your bleeding became persistent, heavier or you developed abdominal pain.

The only way that a continuing early pregnancy can be confirmed is when a baby with a heartbeat can be seen on scan. The heartbeat can usually be seen at around 6-7 weeks of pregnancy. If you have had vaginal bleeding with or without abdominal pain and your urine pregnancy test is positive then a scan would be offered at this gestation. The scan findings will determine what your continuing management will be.

If a baby and heartbeat is seen in your uterus on scan then this reassures us that the pregnancy is continuing. You will not require any further investigations.

If the scan shows a baby which measures 7mm or more but there is no heartbeat then unfortunately this would diagnose a pregnancy loss (miscarriage) as a baby of that size should by now have a heartbeat. The staff looking after you will advise of the options that you have for the management of your pregnancy loss. For more information on Incomplete and Missed miscarriage please click on the link.

If the scan shows a baby measuring less than 7mm with no heartbeat or a pregnancy sac with only a yolk sac inside then a further scan is required in 1-2 weeks as this would give the pregnancy enough time to grow so that the heartbeat could be seen on scan. For more information on Early Pregnancy Loss please click on the link.

If there is no growth or no heartbeat noted on the next scan then a miscarriage would be diagnosed.

If the first scan shows an empty sac or an empty uterus then we need to do further investigations as sometimes the empty sac is actually just the effect of pregnancy hormone on the lining of the uterus, it looks like a sac though the actual sac is outside of the uterus.

If your scan shows an empty sac which measures >25mm mean diameter then the diagnosis would be that you had unfortunately had a miscarriage, the staff looking after you would discuss your management options.

If <5 and you do not have heavy vaginal bleeding+/- abdominal pain then no further management would be required as your body has dealt with the pregnancy loss.

If hormone levels are reducing then we would continue to take bloods until they are at a non pregnant level.

Possible Ectopic pregnancy or pregnancy of an unknown origin  – blood levels remain static. (Click on link for more information or see box below).