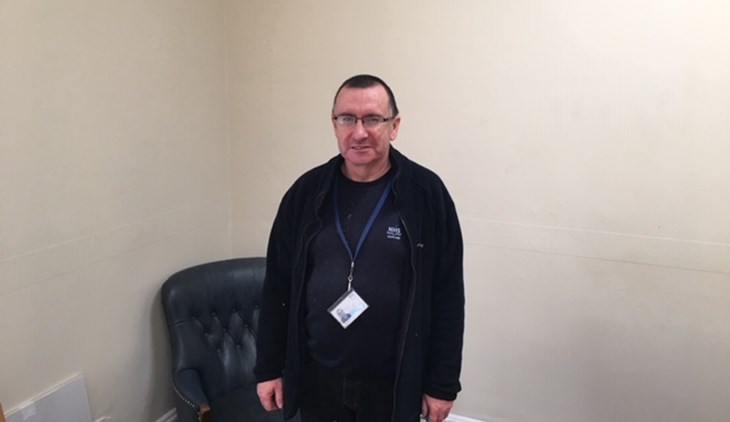 Congratulations to Christopher Quinn, who has passed his Adult Apprenticeship and has started his new post as a Mechanical Technician.

Chris has a long-standing relationship with Dykebar Hospital. He was born in a Hospital House on the Dykebar site in November 1964 and started as a groundsman there in July 1986.

He covered all the duties associated with the post such as cutting grass, tending the planted borders and keeping the bowling green in top condition. He worked at this post until 1998, when he moved to become a maintenance assistant which included assisting the craftsmen and looking after the steam boilers in both Dykebar and Hawkhead Hospitals.

Working in this role gave him a yearning to gather more knowledge and he decided he would like to train to become an engineer, using the adult apprenticeship which the Board has in place. Chris had an initial meeting with Alan Gallacher, general manager estates, who decided that he would make an ideal candidate for this training.

Mark Riddell, Head of Estates Operations, said: “Christopher has put a lot of effort and hard work into achieving this over the last few years and it’s great to see that he will now be taking up a substantive post with the Dykebar Estates team.

“Hopefully over the next few years he can take the next steps in gaining the different experiences that come with the role which will ultimately make him a better tradesperson.”