Realistic Medicine in action: Safer Use of Medicines -Patient Self-Verification of Medication History

Realistic Medicine can be applied to many different areas of healthcare, not least in avoiding prescribing errors. By applying Realistic Medicine principles and involving patients more in these discussions as soon as possible after hospital admission, the Medicines Reconciliation process can be improved.

Andrew Carruthers, senior pharmacist at QEUH and his colleagues, have shown that patients can participate in, improve and add value to the verification process. Their approach provides an opportunity to “sense check” with patients which medicines that are actually being taken at home, and discuss how they are managing with medicines (in general), along with their key concerns / hopes are with respects to medication. In this way, they ensure that medicines are prescribed in hospital as closely as possible to the way as they are being taken at home, reducing the risk of preventable harm.

Andrew said: “By allowing more time and opportunity to consistently involve patients in the construction of their “Medication History” and empowering earlier, meaningful contribution to discussions about their own medicines – we can reduce preventable prescribing errors and improve medicine safety. This is an example of Realistic Medicine in action.”

He added: “It is important that we continue develop processes to involve patients in discussion about their medicines and give them adequate time for meaningful contributions.”

A patient was admitted to hospital in the early hours of the morning. On admission, she was briefly asked about her medications but due to her distress, she had forgotten to mention lidocaine patches which had been recently prescribed by the GP, and these were not prescribed.

Over the course of the next few days the patient felt her pain had worsened and she was requiring more breakthrough pain relief that normal. When included in the initiative, the patient was given the time to review her medicines and took the opportunity to highlight that the patches were prescribed before admission. The patient commented that she felt under pressure on admission when asked about her medicines, and then was “too scared” to correct anyone afterwards. The patches were then prescribed for the patient.

Prescribing errors are a significant problem in healthcare – both in hospital and in the community – as this Healthcare Improvement Scotland* infographic shows: 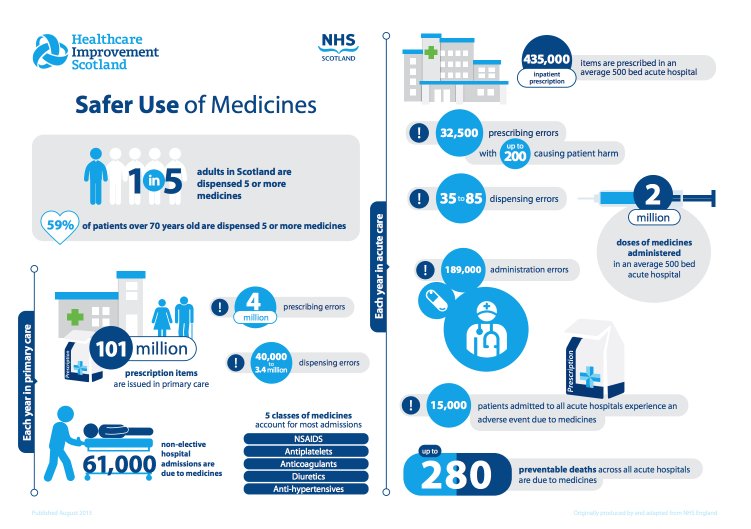 The NHS Greater Glasgow and Clyde Policy for Medicines Reconciliation in Hospital (2015), states that the medicines reconciliation process should be completed for patients within 24 hours of admission. This requires medications to be verified using a minimum of 2 information sources, one of which should be the patient or their carer.

We know patient involvement in medicines reconciliation can be poor. An audit in 2017 at the Royal Alexandra Hospital (RAH) showed that only 43% of patients were identified as a source of information during the medicines reconciliation process. The audit estimated that 65% of patients admitted could have been used as a source of information. A more recent audit in 2020 showed similar results with only 44% of patients admitted to the QEUH had been asked about their medicines on admission. When asked, barriers to increasing patient involvement were time pressures and, with the medications Emergency Care Summary (ECS) being online, IT is often poorly accessible in patient-facing areas.

In this pilot project patients were presented with a modified “Patient View” of their Emergency Care Summary (ECS) and asked to confirm if they assessed the list of medicines to be correct / advise of any amendments. There was also space provided for patients to add any additional information they wished to share about their medicines. This proved successful, with the majority of patients able to verify their own medication history from ECS, and many provided additional information that may not have otherwise been apparent. It is planned, with eHealth support, that a “Patient View” Report can be made available in NHS GGC (the version used in this project needed to be individually modified and printed) so that many more patients in the future would have an opportunity to be more involved in this element of their care.

In response to the audit results, a ‘proof of concept’ project tested a process in which patients and carers self-verified their medication history using a re-formatted print out of the ECS report. The format of this “patient view” ECS report was developed using multiple PDSA cycles to find the best format to aid patient / carer involvement. For example multiple columns on the ECS were removed for patients including the “start date” as patients found this confusing. Patient are then given this information, asked to complete it and given adequate time to do so, freeing up staff to perform other tasks. This developed “Patient-View” is currently labour-intensive to produce, but increased patient involvement in the medicines reconciliation process from 43% to 68% in the participating unit.

This year, this same process was tested in downstream medical wards at the Queen Elizabeth University hospital and was also successful. Patients were able to make corrections to their ECS, add value with comments about their current medication history and felt empowered and involved in their care in being able to do so.

Figure 1 shows that the vast majority of patients asked are able to verify all of their medications (76%). Those who could not fully self-verify medicines include those who were on compliance aids to help with medicines, or did not have their reading glasses with them. These patients were still able to add value. Excluded patients include those from admitted from care home, or those with known known cognitive impairment. 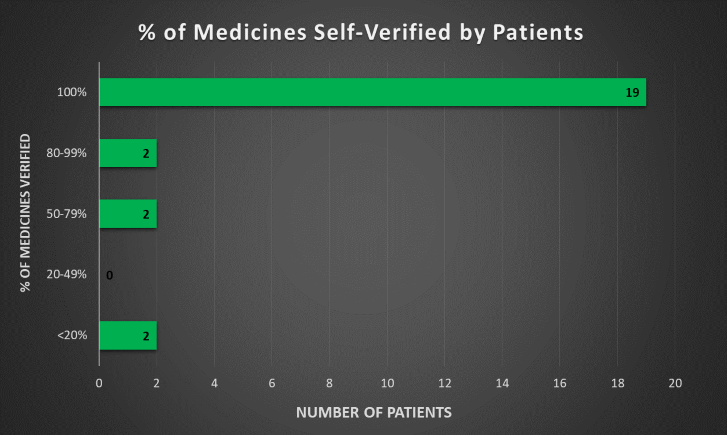 Figure 1. The number of patients able to self-verify their own medications.

"Very worthwhile – I was able to highlight medications that were stopped a few weeks ago."

"I felt empowered. I was given the time to be give information I thought was important about my medicines."

"I stopped taking all my medicines months ago due to side effects."

"I take all of my medicines with my dinner because it helps me feel less sick."

Some clinicians involved in the testing of this process were initially concerned that patients could knowingly give incorrect information about their medicines. However, ECS acts as a second source so any discrepancies should be actioned by using professional judgement, prior to prescribing.

Alister Maclaren, Lead Pharmacist for Medicines Information & Governance said, “People using healthcare services can too often be passive recipients of the care they receive and not empowered to play their part in shared decision making about their care. A successful medication history on admission to hospital depends on good patient engagement and the information they hold about their medicines. The ‘Patient Self-verification of Medicines’ project has successfully developed and tested a process which enables patients to be active participants in their care and demonstrates the added value this brings. This is something we want to roll out across our services.”

This piloted model takes a person-centred approach to improve medicines safety and patient care and aligns closely with the intentions of the Board’s Quality Strategy. In future, the data presented to patients needs to be optimised in terms of format and layout, and the process needs to integrate fully with current admission processes.