New music therapy for children and young adults at the QEUH

Music therapy is offered on a one-to-one basis for any interested patient at the Queen Elizabeth University Hospital’s ward 6A.

The ward is currently being used to care for haemato-oncology patients while there is continued improvement work at the Royal Hospital Children.

The sessions are provided by Team Jak Foundation in partnership with the Glasgow Children's Hospital Charity. It is available once a week and open to all interested patients on the ward.

Patients can sing songs, play instruments, listen to music or make up new songs or stories. No prior music knowledge or ability is required.

Calum Muir is a music therapist and hosts the sessions.

He said: “We’re here to create a relaxed space so there isn’t any pressure to perform or sing. Children here are facing unique challenges so each session is a wee bit different. Sometimes we’ll sing, write songs or if someone is feeling too tired, we’ll just talk and hangout. It’s all about creating time where they can have some fun, outside of medicine.” 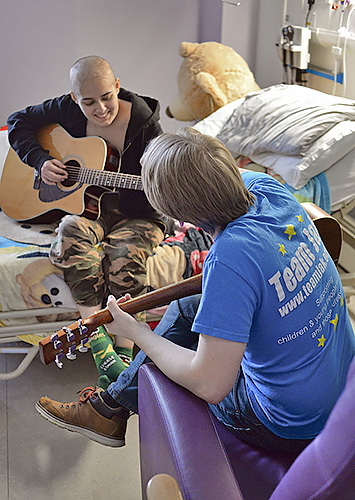 Feedback from the first few sessions has been positive, with some repeat customers already.

She said: “Music is such an important part of Yasmine’s life but she’s been missing out on this lately. It was just amazing to see her pick up a guitar with Calum. Before you knew it, they were both playing together and it brought a tear to my eye.

Sarah-Jane McMillan, Senior Staff Nurse, Ward 6a QEUH, NHS Greater Glasgow and Clyde said: “We’re pleased to offer music therapy to our patients. Some of our teenage patients in the ward said they had missed music classes from school while in hospital. Many have now had guitar practice with Calum and we’ve had great feedback from patients, families and staff alike.”

A recent report from Children’s Health Scotland found the Royal Hospital for Children was above the national average for many education and play indicators.

Ward 6A and 4B, Children’s Haemato-Oncology Unit