Throughout the western world hospitals and the services they provide were changing fast. Many of the most important s...

Throughout the western world hospitals and the services they provide were changing fast. Many of the most important services were on a "same day" basis – in out-patient clinics, minor injuries units, X-ray and rehabilitation departments, day case surgery. Doctors were becoming more specialised – especially in surgery – and there was growing evidence that
specialist teams got the best and safest results, especially where the illness or injury was most serious.

Patients expected faster, more convenient services in patient-friendly modern surroundings, and the confidence of knowing the very best people were in the place they were needed
most.

In Glasgow, there were too many dilapidated old buildings with scattered services and dispersed staff. Hospital services were not fit for the 21st century.

It was decided that only a major redesign of services could give people in Glasgow the standards of service they should expect.

Many cities had tackled this problem by closing some of their large acute hospitals, sometimes replacing them with new ones on the edge of the city or town. We did not want to go down this route – but at the same time, doing nothing was not an option.

Since the autumn of 1997, wide-ranging discussions had been held across Glasgow and surrounding areas about the sort of services patients needed.

On the face of it, the second of these options was not easy to reconcile with the first. But the development of "same day" services (known as "Ambulatory Care") provided a way in which the city could fully achieve the second (essential in the interests of safety and best possible results in diagnosis and treatment) and at the same time get very close indeed to also fully providing the first.

The third message – the need for modern, well-designed, user-friendly facilities – led to investigations into a range of options, including the creation of a new hospital on a new central site.

What was the pattern of services at the time?

The South Glasgow Trust services were provided from five sites:

Served a population of approximately 200,000.

Its buildings mostly dated from phased development in the second hjalf of the 20th century. Links between related departments were often poor and it was increasingly difficult to provide modern diagnostic and treatment methods.

A number of services were integrated between the Victoria Infirmary and Southern General Hospital (i.e. ENT, eyes, Urology, Dermatology and Maternity) and for these services inpatient and day case facilities were only at one or other site.

Not only provided the full range of district general hospital but had a number of specialties which serve not only the whole of South Glasgow but Greater Glasgow, the West of Scotland and further afield – i.e. National Spinal Injuries Unit, Institute of Neurosciences, WestMARC (the wheelchair and artificial limb service), and Oral and Maxillo-facial Surgery.

The emergency and trauma nature of the specialties located at the Southern General required good access to the motorway network and helicopter access – the site’s location and large campus made this possible. Although some parts of the Southern General were in old buildings, it also had some 600 beds in modern facilities.

Mansionhouse Unit: Unit for assessment, rehabilitation and continuing care for the elderly.

What was being proposed?

The plan was to create a new single set of facilities for in-patient services on one site to serve the south side, wi...

The plan was to create a new single set of facilities for in-patient services on one site to serve the south side, with a new, state-of-the-art Ambulatory Care Centre at the Victoria Infirmary.

The idea had strong support among south side doctors, and it had been supported in much of the wider public debate that had already taken place.

At the time, the south side had to maintain two 24-hour rotas in orthopaedics, general surgery and gynaecology when the workload to be covered could be dealt with by one.

Having two rotas instead of one added to the longstanding problem of junior doctors working scandalously long hours and often meant less consultant time was available to tackle waiting times for clinics and operations.

A single set of specialist services for the south side meant that specialist teams could be larger, and with their beds concentrated together their time could be used more effectively, so keeping waiting times down.

There was a strong desire for a single "A & E Department". This would allow more consultant presence in dealing with serious cases for a greater part of each 24 hour period than is the case at the moment – it would be a major step forward in quality of service.

The proposal to include a Minor Injuries Unit in the new Ambulatory Care Centre at the Victoria maintained local access for the great majority of people who used the Victoria Infirmary at the time.

A & E Department. A very similar service has existed at Stobhill for years – people are very pleased with it and there have been no problems about its safety.

Our leaflet on Accident and Emergency Services goes into detail about the concerns that people have expressed about longer ambulance journey times in cases where someone has had a heart attack or very serious accident.

The options for a single in-patient site

We looked at five options: A new Ambulatory Care Centre at the Victoria Infirmary and a completely new hospital fo...

We looked at five options:

In looking at Options 1 and 2 the Trust explored whether it was also decided to consult on re-locating the Yorkhill Children’s Hospital services to the south side. The view was that there were good clinical reasons for considering it and it would also help to ensure that maternity in-patient services remained securely in South Glasgow.

Three possible sites were identified: In the Pollok area a site of approximately 44.7 acres, incorporating the Cow...

After further investigations, Site 1 was considered the one worth detailed consideration.

It would have meant closure, demolition and sale of the Victoria Infirmary, Mansionhouse Unit and most of the Southern General Hospital site.

The cost of building a new in-patient hospital at the Cowglen site and an Ambulatory Care Centre at the Victoria Infirmary was estimated at £346.4 million (assuming financing under Public Private Partnership), with annual running costs of £18.4m.

These figures did not include the cost of buying land from NSB or the owner of the field adjacent to Cowglen Hospital. However, it was estimated that around £22m in receipts from selling land at the Victoria Infirmary, Mansionhouse Unit, Southern General or Yorkhill would help off-set this cost.

There were, however, some significant risks with this option:

The Southern General sat on 67 acres of land, and its geographical location close to the M8, M77 and Clyde Tunnel mad...

The Southern General sat on 67 acres of land, and its geographical location close to the M8, M77 and Clyde Tunnel made it very accessible to ambulances and the public.

In the previous decade or so the hospital had benefited from around £60m of capital investment to provide new or substantially upgraded facilities. The site also had a range of modern in-patient facilities so there was a significant basis around which a new hospital could be developed.

A redevelopment of the existing Southern General Hospital site would mean closure, demolition and sale of the Victoria Infirmary and Mansionhouse Unit.

A proposed three-part development over a ten-year period, to provide a new Southside hospital based around the existing investment, would carry a total cost of £241.8m.

However, there was a risk that the third part of the redevelopment might not proceed if government or Health Board policy changed after completion of the first contract. There was also concern around risk of disruption to existing services as buildings would be demolished and constructed in the centre of existing facilities.

Choosing between the two options

Both options included provision for a new Ambulatory Care Centre and 120 rehabilitation beds. In addition, they both ...

Both options included provision for a new Ambulatory Care Centre and 120 rehabilitation beds. In addition, they both included a "23-hour elective surgery" service at the Victoria Infirmary which would allow minimally invasive surgery and treatment to be given to those patients needing one overnight stay to aid their recovery.

The differences between the options lay in four areas – accessibility, speed of completion, risks and cost.

While it was estimated that the Cowglen option would be completed earlier, in all other areas the balance was in favour of the Southern General option.

In April 2000, public consultation on Modernising Glasgow’s Acute Hospital Services began, with the one of the key co...

In April 2000, public consultation on Modernising Glasgow’s Acute Hospital Services began, with the one of the key considerations being the creation of a newly built hospital for the south side of the city. The Southern General was the preferred site for the project.

After seven months, the Greater Glasgow Health Board announced that it was confident its five key aims had widespread recognition and support. The five aims were:

The Greater Glasgow health board was proposing a new hospital on the site of the Southern General. It would be a comp...

The Greater Glasgow health board was proposing a new hospital on the site of the Southern General. It would be a completely new construction, with the exception of:

However, in making its case for the Southern General site, the board recognised there was considerable backing for a greenfield site option, at Cowglen.

It proposed that the outline business case should compare the Southern General, Cowglen and a third option to do nothing.

What happened next - the key dates

June 2002: The Scottish Government Health Secretary approves the city-wide Acute Services Strategy, including the new hospital at the Southern General.

2004: Health Secretary announces funding for new Children’s Hospital to be built on a site that will allow “triple” location of services.

May: Project Director appointed for the new South Glasgow Hospitals.

February: OBC for hospital project approved by Board.

May: FBC for maternity services approved.

February: Advert for construction placed in the Official Journal of the European Union. Open Day held at Hampden Park.

September: Tenders returned to Board and evaluation commences.

October: FBC approved by Board.

26 January: Hospitals handed over to health board. 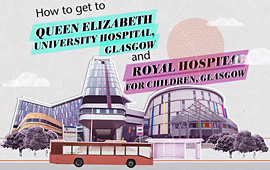 Know who to turn to this festive period