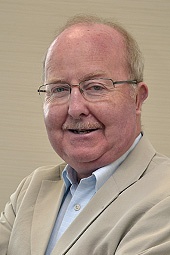 Ross brings to the board a financial background, local knowledge and a general understanding of health matters. Ross worked as a Chartered Accountant for nearly 30 years in the financial services sector based in Glasgow. He has also served as a local councillor in Inverclyde for 22 years and was a regional list Member of the Scottish Parliament for the West of Scotland for twelve years, including a term as a member of the Health and Sport committee, gaining a thorough understanding of health related issues in the West of Scotland.

All appointments are made on merit and political activity plays no part in the selection process. However, in accordance with the original Nolan recommendations, there is a requirement for appointees’ political activity within the last five years (if there is any to be declared) to be made public.

From 1999 to 2011 Ross was a Regional List Member of the Scottish Parliament for the West of Scotland representing the Scottish Liberal Democrat Party.

Want to make a difference to the NHS in your local community?