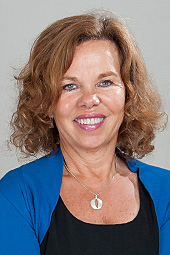 Linda de Caestecker became a member of the NHS Board in January 2007.

During 2015 and 2016 she undertook a year’s extended leave of absence to work for the international charity, FIGO, promoting women’s health in low resource countries, returning to her Director of Public Health post in August 2016.  She continues to have a special interest in maternal and child public health.