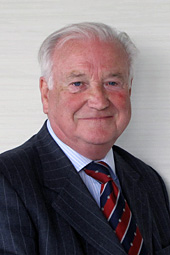 As of 1st June 2020 John Matthews has been appointed Vice Chair to the Board.

Rev John Matthews became a Non-Executive member of the NHS Board on 1st July 2016.

Rev John Matthews has held senior positions within industry, latterly with General Electric of America. In his early forties he studied for the Ministry of the Church of Scotland and was Minister of Ruchill Parish Church in North Glasgow for 19 years until his recent retirement. John is passionate about engaging with the wider social and economic concerns of Glasgow and beyond. He has served on the Boards of Glasgow Alliance, Glasgow Community Planning Partnership and Scottish Enterprise Glasgow as Deputy Chair. In 2010 he chaired an Independent Enquiry into Maximising Recovery from Dependent Drug Use in Scotland. He was on the Council of the Royal College of Physicians and Surgeons of Glasgow and chaired the Lay Advisory Board. He became chair of Simon Community Scotland in 2008.

John was awarded the OBE for services to economic development in the Queens Birthday Honours List in 2007.