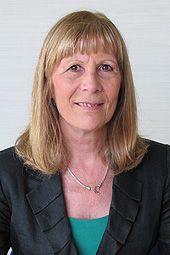 Jacqueline Forbes became a Non-Executive member of the NHS Board on 1st July 2016.

Jacqueline is a development professional with extensive experience in residential and mixed use development throughout Scotland and a wide range of commercial, technical and business skills which she hopes will be of benefit to NHS Greater Glasgow and Clyde.

Jacqueline graduated from the Mackintosh School of Architecture in Glasgow and has worked in private practice in Glasgow; local authority in Kilmarnock and Loudoun and Clydebank District Councils before joining the Miller Group in Edinburgh in 1989.  She progressed to Architectural Manager in Partnership Housing before returning to Glasgow as Architectural Manager for the West of Scotland. In 2001 she added an MBA to her qualifications and became Development Manager responsible for the redevelopment of Leverndale in Crookston and Canniesburn Hospital in Bearsden. She was also a Board member of several joint venture companies ensuring sound financial and business management.

In 2006 Jacqueline joined Stewart Milne Homes in Aberdeen as Development Director before returning to private practice as Residential Director with Halliday Fraser Munro where she was involved in the delivery of a wide range of developments including the Aberdeen Maggie’s Centre. She now owns her own Property and Development Consultancy.

Jacqueline is also a former External Examiner of Professional Practice at the Mackintosh School of Architecture and Edinburgh University as well as a former Chair of Women in Property Northern Scotland.