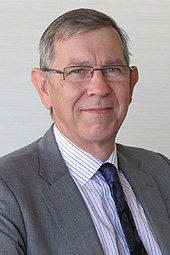 As of 1st June 2020 Ian Ritchie has been appointed Vice Chair to the Board.

Ian Ritchie became a Non-Executive member of the NHS Board on 1st July 2016.

As a recently retired Trauma and Orthopaedic surgeon, Ian has 25 years first-hand experience of the challenges of providing a service in a District General Hospital. He had a general orthopaedic practice with an interest in upper limb problems. Ian has always had an interest in surgical training which he pursued as Director of Surgical Training at the Royal College of Surgeons of Edinburgh (RCSEd) and has delivered courses on these topics in UK and internationally.

Ian was elected President of the RCSEd from 2012-2015 during which time he saw the challenges and frustrations experienced by all levels of staff in the NHS in managing the enormous pressures and changes affecting us in delivering healthcare.

Ian was Chair of the Academy of Medical Royal Colleges and Faculties in Scotland for two years (2013-15).

In addition to his role as Non-executive director on the Board of Greater Glasgow and Clyde, Ian is the chair of the Health and Social Care Physical Activity Delivery Group for the Scottish Government.

NHS Board
Want to make a difference to the NHS in your local community?
Coronavirus (COVID-19) Guidance