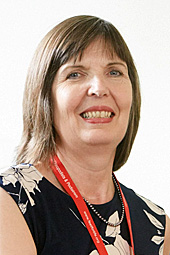 Dorothy graduated from the School of Chiropody in 1982 and has worked as a Podiatrist in NHS Ayrshire and Arran, NHS Lanarkshire before joining NHS Greater Glasgow and Cllyde in 1997.

As a member of the Society of Chiropodists and Podiatrists, she was elected as a trade union representative for NHS Greater Glasgow and Clyde in 2002 and has been an active member of local and national forums since. Dorothy was elected as Employee Director in June 2016 and took up the role on 1St October 2016.

Dorothy has worked in both acute and community settings in the NHS and also worked privately for a number of years.

Dorothy is one of the founder members of Knightscliffe Temple Community Credit Union and has worked as a volunteer with this credit union for over 25 years. She is also a member of the Board of Directors.