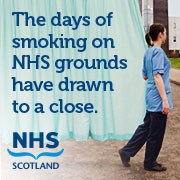 ALL NHS grounds across Scotland are to become smokefree by 31st March 2015. From this date, patients, visitors and staff will be asked to wait until they are off NHS grounds before lighting up.

This ambitious move to achieve smokefree status in the grounds of every hospital, health centre and NHS building across the country is part of a national drive to create a tobacco-free generation within Scotland by 2034.

And today, 2nd March 2015, Minister for Public Health, Maureen Watt MSP, launched a major new national TV and radio campaign asking smokers for their help to make this vision a reality. Speaking at the launch event held at the New Stobhill Hospital where the national TV advert was filmed, Minister for Public Health, Maureen Watt, said: “Hospitals are places where people come to recover from illness and injury, so it can’t be right for patients and visitors to have to walk through clouds of smoke on hospital grounds.

Tobacco is the biggest cause of preventable death in Scotland – contributing to more than 13,000 deaths a year. There can be no place for this deadly product on NHS hospital grounds.”

The campaign was developed by NHS Heath Scotland, a national health board which works with the public, private and third sectors to reduce health inequalities and improve health.

NHS Health Scotland Chief Executive, Gerry McLaughlan, said: “Scotland is a world leader in legislating and implementing effective tobacco control policies. The drive to make our NHS grounds smokefree is a vital step in helping us achieve a smokefree generation within the next 20 years. “

We recognise how much effort is required from smokers to refrain from smoking on NHS grounds at what can often be a particularly stressful time for them.“

This campaign is not asking smokers to quit but instead to wait until they are off NHS grounds before lighting up.”

The message of the month-long TV and radio campaign is simple – the time for smoking on NHS grounds has drawn to a close.

A green curtain - #greencurtain – is seen being pulled by a nurse from a patient’s bedside, out of the ward, through the hospital, past parked cars and eventually around the entire perimeter of the hospitals grounds.

Linda de Caestecker, NHS Greater Glasgow and Clyde, Director of Public Health, said: “The NHS Scotland smokefree commitment extends to all our premises, hospitals, health centres and other community facilities, together with NHS offices and other non-patient buildings.“

The NHS in Scotland has a duty of care to protect the health of, and promote health behaviours amongst, people who use or work in our services. This is why the time for smoking on hospital grounds has drawn to a close.”