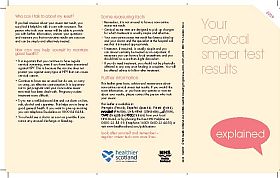 Women across the Greater Glasgow & Clyde area are being urged to protect themselves against cancer by having regular cervical screening.
Following on from 2014’s successful ‘Smear’ campaign, NHS Greater Glasgow & Clyde (NHSGGC) is reminding women of the importance of regular testing.
All women aged between 20 and 60 years of age are invited to attend potentially life-saving cervical screening every three years.
To further reinforce the campaign’s message, an advert outlining the importance of cervical screening will be previewed to an invited audience at the Vue Glasgow Fort tonight (Tuesday, 20 January).
The advert, which will be shown before all screenings at the cinema for a month, will be followed by a talk from Councillor Maureen Burke and a prize-giving for people who took part in the ‘Don’t Get Scared, Get Screened’ breast cancer screening initiative.
Consultant in Public Health Medicine Emilia Crighton at NHSGGC said: “On the back of last year’s campaign it’s reassuring that the majority of women invited for a smear test do attend.
“However, it’s extremely worrying that in some areas approximately one in three women is not having their regular cervical screening.
“Research shows the main barriers stopping women from attending cervical
screening are fear, embarrassment and pain.
“We’re working on developing different ways of encouraging women to attend their appointment. Regular cervical screening is the best way for women to protect themselves against cervical cancer and the test takes less than five minutes.
“I would strongly urge everyone who receives their invitation to take up the offer. It may save your life.”
Cervical cancer is a preventable disease and regular screening prevents eight out of 10 cancers developing. All women in Scotland aged 20 to 60 are offered cervical screening tests every three years and screening saves around 5,000 lives each year.
The screening itself tests for any early changes in the cells caused by a strain of virus called human papillomavirus (HPV). HPV is an extremely common virus – more than 100 strains have been identified so far – and they can affect different parts of the body.
However, the high-risk HPV types can, in some cases, cause the development of cervical cancer. The HPV infection can cause changes to the cells of the cervix creating abnormalities that can over the years develop into cancer.
Regular screening is so important as any changes in the cervixcan be spotted quickly and any potential problems dealt with.
It is estimated that around 80 per cent of people of reproductive age will be infected with a HPV virus at some point in their lives. These are transmitted through skin to skin contact. It means that it’s possible for anyone to contract HPV through contact with someone who already has the virus.
ENDS
Notes to editors
Every year in the UK, 5,000 women are diagnosed with cervical cancer and nearly 1000 women die from the disease. That’s three women every day.
You can find information about cervical cancer and the cervical screening programme from the NHS inform website at www.nhsinform.co.uk
For further information either tel: 0141 201 4429 or email:  [email protected]
Search news
Latest news
News Archives
Coronavirus (COVID-19) Guidance