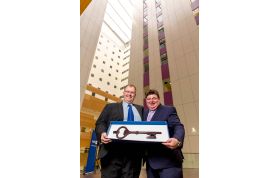 The construction of Scotland’s largest ever NHS hospital project has been delivered under budget and five weeks ahead of schedule.

Robert Calderwood, NHS GGC Chief Executive, said: “I am delighted that our partnership with Brookfield Multiplex has seen the delivery of this world class hospital complex achieved not only ahead of schedule but also under budget.

“This accomplishment is testament to every single individual who has worked on this project since the blueprints were first drawn up.

“As we take delivery of the project and embark on the final phase of readiness for the first patients I wish to acknowledge contribution of the very many people involved. From the architects and NHS planners and clinicians to the hundreds of construction workers of all disciplines and the wider business community with whom we have contracted to ensure a lasting community benefit from this project – all deserve recognition for their efforts.”

Health Secretary Shona Robison said: “This is an exciting stage in the development of the new South Glasgow Hospital campus as we get ever closer towards completion of the project and welcoming patients into the facility. This development has been Scotland's biggest-ever hospital building project, so bringing this in ahead of time and under budget is a real achievement in itself.

“The Scottish Government has invested £842 million in this project, which will provide patients with access to services for all ages on a single site - bringing with it increased efficiency, shorter waiting times and better continuity of care. It is part of over £2 billion of Government investment in Scotland’s health infrastructure over the spending review period, demonstrating our commitment to providing modern, state-of-the-art NHS facilities for patients.

"This major development will transform healthcare for patients and staff and I am very much looking forward to seeing the hospital campus up-and-running and welcoming patients in the summer.”

Alasdair Fernie, Brookfield Multiplex Project Director, said: “Today marks a major landmark in a unique project which Brookfield Multiplex is proud to have delivered for the NHS Greater Glasgow and Clyde. To manage a project of this scale and complexity requires true partnership and a closely-knit, dedicated team. Over the last four years we have all work extremely hard to construct what can only be described as a world class facility. We are thrilled to be handing over the keys today, five weeks ahead of programme”.

Ross Ballingall, Brookfield Multiplex Managing Director Europe, added: “Our role in the project is underpinned by our Community Benefit Strategy, which ensures that the construction process brings maximum benefit to the local community, including jobs, apprenticeships and training for local people, and opportunities for small businesses in the supply chain. The buy-in we have had from stakeholders across the local community has been remarkable, and has made the project all the more rewarding. We now move into the last phase of the overall hospital campus master plan, which will be completed the last quarter of 2016”.

Now that the buildings have been handed to NHSGGC the work begins to fit the hospitals out and make them ready to receive the staff and the first patients in a little over three months’ time.

Fitting out the South Glasgow University Hospital and the new Royal Hospital for Sick Children is an enormous project in itself.

Over the next three months our dedicated New South Glasgow Hospitals Project Team will lead the migration and commissioning process which will include:

• More than 10,000 to undergo orientation to their new place of work before transferring over to the site
• Purchase of more than £26m of new equipment including anaesthetic machines, patient monitoring, syringe pumps and defibrillators.
• The fit-out, testing and cleaning of 7,000 rooms ready for occupation
• Patching of 12,000 IT outlets
• pre-equipping of 2300 PCs, 350 printers and 190 Mobile ‘clinical’ laptops
• installation of 12,000 dispensers for soap, hand gel and paper towels
• 2,000 wireless handsets and 3,500 desk top phones across the campus.
• The purchase and installation of £13 million of new MRI, CT and Digital General X-Ray equipment.
• A patient entertainment system at a cost of £1.3m which allows patients to access an individual TV at their bed.
• AGV units that will deliver food, linen and supplies throughout the hospital complex as well as the specialist trolleys needed for the AGV’s.

Robert Calderwood added: “The scale of what is now involved over the next three months is truly immense. When the new hospitals open, services from four existing sites will transfer over. This therefore will involve the transfer of patients on a scale never seen before in Scotland together with a removals operation which will see thousands of items transferring onto the new campus from the Victoria Infirmary and Mansionhouse Unit, Western Infirmary, Royal Hospital for Sick Children and Southern General.”

The scale of the migration of services to the new South Glasgow University Hospital and the new Royal Hospital for Sick Children is both significant and complex to plan.

Our clinical and management teams have had to work very closely with colleagues across other services – especially the Scottish Ambulance Service – to ensure co-ordination delivers continuity of services.

The moving of patients from hospitals to the new hospitals is one aspect that presents logistical challenges of some significance.

Those involved in the migration schedule have worked tirelessly to deliver a model that will be safe for our patients and to the continuity of services across the city and beyond.

The entire operation is being co-ordinated and managed by our New South Glasgow Hospitals Project Team who have drawn up a detailed programme of all the activity, with daily schedules of equipment deliveries, staff training and familiarisation and testing of all areas of the hospitals.

The first services will transfer on Friday 24 April 2014 with a target completion date of 14 June 2015. The overall Migration Programme will take eight weeks.