THOUSANDS OF WOMEN CALL THE MIDWIFE! 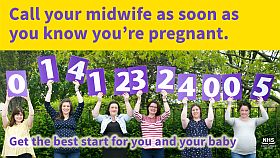 Almost 4000 women have called a new central booking line to make an appointment with their midwife since it was launched by NHS Greater Glasgow and Clyde (NHSGGC) at the end of May 2014.

The booking line has proved so successful it has handled up to 120 calls a day from mothers-to-be keen to make an appointment with a midwife by their 12th week of pregnancy.

The telephone number – 0141 347 8422 – was first launched in the Glasgow area at the end of May and then latterly in the Clyde area in mid-June.

The call centre, which is based at the Southern General Hospital, is part of a national drive to promote the best start for pregnant women and their babies.

At this early booking stage midwives can ensure the best long-term care is being provided for mum and baby by assessing the mother’s health needs and provide support around eating well, exercise, dental care, smoking, drinking and housing.

The first two trimesters following conception are critical, when the fetus is most vulnerable to damage caused by tobacco, drugs and alcohol, maternal stress and poor nutrition.

Michelle McLauchlan, General Manager, Obstetrics and Gynaecology, said:
“The introduction of this new central booking number has proved to be popular with women. With only one number to call we are hopefully making it easier for mothers-to-be to get in touch with us earlier.

“We want to continue to raise awareness of this number so that mums-to-be have all the help and support they need as early as possible from their midwife.”

When women make a call they will be given an appointment with a named midwife, a scan slot, and a SCI Gateway information request will be sent to the GP with details of the two appointments asking for medical history to be provided in advance of the booking appointment.

As far as possible, women will be offered appointments close to the GP, and their local hospital, to ensure improved continuity of care.
There will be some exceptions, for example if the GP considers that a woman needs to be seen very early or should be seen first by an obstetrician, the usual SCI referral process can be followed.

Leaflets and posters promoting the booking line have been distributed in health and community settings, and are available in different languages.