Praise for Health Staff After Achievements Recognised at Annual Review 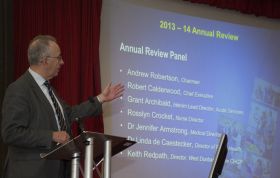 The Board’s Chairman, Andrew Robertson, reported significant achievements in meeting or exceeding the majority of its HEAT targets through which thousands of patients have benefited from health improvement initiatives and earlier and more innovative treatment.

Attendees heard how there were some 18,698 successful quit smoking attempts by 2013/14 from our 40% most deprived communities smashing the national target by 53 percent. It was also reported that staff in both hospitals and in the community delivered some 18,878 alcohol brief interventions exceeding the planned number by 34 per cent. Child healthy weight targets were also surpassed by some 14 per cent.

Mr Robertson said: “I am very proud of the performance of our 38,000 workforce. They have delivered some tremendous successes and worked hard to drive up quality and standards of person centred care.

“We have seen some excellent progress in relation to improving health, reducing health inequalities, infection control and waiting times and we have also delivered significant developments in community based healthcare.

“Whilst we have exceeded many of our targets there are still challenges which we are working hard to address.”

Some areas where NHSGGC is continually working to improve performance include A&E waiting times and admission to a stroke unit on the day of admission or the day following presentation.

Delayed discharges also remain a challenge and we continue to develop our work with social care on driving change, creating new ways of working between hospital care and community based services and in progressing the integration of health and social care.

NHSGGC Chief Executive, Robert Calderwood, added: “In addition to the progress that we have made against our national targets a number of major strategic milestones have also been achieved this year. We have opened two new £20million health centres, completed a major £15 million refurbishment of the Lister Laboratories at Glasgow Royal Infirmary and celebrated the topping out of the new £27 million Teaching and Learning Centre on the New South Glasgow Hospital campus in a joint development with The University of Glasgow.

“We are also on schedule and within budget for delivering the new £847million New South Glasgow Hospitals Campus next year.

“I would therefore like to pay tribute and thank our 38,000 staff who have made these achievements possible.”

Some of NHSGGC’s other key performance highlights include:

One main area of discussion and comment from the public during the annual review was in respect of NHS funded Homoeopathic services, particularly for inpatients.

NHSGGC confirmed that the position we adopted in 2005 to retain services at the Centre for Integrated Care has not changed.

However it was stressed that we are reliant on the ongoing commitment from other Boards to make use of the inpatient services to maintain their viability.

Any changes which may arise as a result of funding decisions by NHS Boards in Scotland would be the subject of full consultation with staff and patients.

Notes to Editor
Images from today’s annual review are available on request.