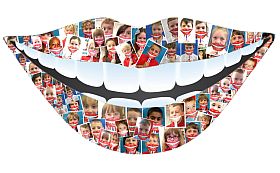 Children from all over Glasgow and Clyde have something to smile about after taking part in this year’s competition for NHSGGC’s Sparkling Star awards for National Smile Month.

Primary three pupils in schools from all over Greater Glasgow and Clyde have been taking part in the competition which asked youngsters to come up with an oral health slogan with a Commonwealth Games theme. In addition, youngsters also got into the groove by taking   smiley ‘selfies’.

Youngsters from Braehead Primary in Dunbartonshire were crowned victorious after coming up with the slogan - “Our School’s Smiles are Gold Medal Winners because we go the extra mile to get the perfect smile.”

Anne Muir, Operational Services Manager (Childsmile) for NHSGGC, said: “Well done to everyone who took part in our competition this year – and thanks to all the youngsters who sent in their ‘smiley selfies’ they really made us smile. Special congratulations to Braehead Primary. Their slogan really captured this year’s theme.

“It is so important that children learn about looking after their teeth and gums at a young age. By asking youngsters to take ‘smiley selfies’ we made it fun for children while also getting the messages through about good oral health.

“We run this competition annually and it gets a fantastic response from teachers and pupils who all seem to enjoy the creative aspect. And with the Commonwealth Games coming to Glasgow this year we thought it was the ideal opportunity to tie in with the excitement that the Games are bringing.”

Every year during National Smile Month NHSGGC’s Childsmile team invites schools to take part in a competition to win the “Sparkling Star Award”.  The Sparking star award is a glass trophy which remains with the winning school for one year.  Each year the trophy is engraved with the date and current the winning schools name.

National Smile Month is the UK’s largest and longest-running oral health campaign. It is organised by oral health charity the British Dental Health Foundation. The campaign aims to raise awareness of important health issues and make a positive difference to the oral health of millions of people throughout the UK.