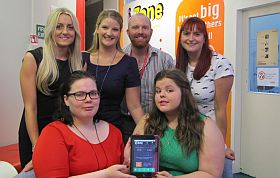 The new smoking cessation app - R2Q (Ready to Quit) – has been designed by young people for young people.

As part of the planning for the app young people aged between 12 and 25 were asked to take part in a survey during December 2013. The results of the survey then helped design the building blocks of the app.

The survey found that more than 80 per cent of young people owned a Smartphone and that 65 per cent of those confirmed they would use an app to help them quit smoking.

A youth group from Greenock also worked alongside app developers Intelligent Mobile Limited and Alienation Digital to ensure that it was designed specifically to meet young people’s needs.

Mhairi Cameron (17) from Greenock was one of the young people involved with the app. She said: “We all got round the table with the designers and discussed how the app should look. We didn’t want the app to be negative, we wanted to give young people a positive app with lots of useful information to help them quit positively. So we wanted tips on how much money people could save and the discussion forum.

“We designed the logo and again we didn’t want it to be obviously about smoking. Smoking is still a problem with young people so we wanted an app that would really help and encourage them. We are really proud of the app because it’s so colourful and positive.”

R2Q, which is now available free from both the Android and Apple store, has a wealth of helpful information including a discussion forum, health benefits of not smoking, quit tips and a user profile for each individual. It also includes contact details for local Smokefree Services.

Melanie Owens, Health Improvement Senior for NHSGGC, said: “Smoking rates among young people have been declining slowly over the last few years, but there is still a high number of young people trying smoking, with rates of regular smoking increasing with age (almost 10 per cent of a difference between 13 year-olds and 15 year-olds in 2010).

“We know that young people are engaged with mobile and online technologies and we felt that in order to fully connect with young people around stopping smoking, an app was the right way to go and it is an addition to the current youth cessation service in NHS Greater Glasgow and Clyde.

“Research shows that the earlier people start smoking the more at risk they are of becoming addicted and of going on to develop long-term health conditions. We also know that as technology advances we need to reach younger people in different ways from our traditional methods.

“Young people are less likely to come along to smoking cessation groups or even to seek help to quit from their GP. So we wanted to develop something ideally suited to young people which they would feel comfortable using.

“This app has been designed by young people for young people and I would like to thank the youth group from Greenock for taking the time to work with us on this. We will continually monitor the app and make any additions or changes as is needed.”

Jamie Lovie from Intelligent Mobile Limited, said:  “When developing an app the most important things to remember are to make it easy to use, desirable, and interactive for your target audience. All of the features included in the new R2Q app cover these points and more. The daily tips, the discussion forum and health benefits will make a positive impact on helping users to quit, and to return to the app to check out their progress will be a great motivational tool.

“R2Q has been an excellent project to work on, from start to finish. Especially being involved with the young people to help design the app, to specification, and build. It is really rewarding seeing the app live, downloaded and actively used by so many people already.”

Scott Gilmour, Creative Director at Alienation Digital, said: "R2Q is an inspiring project that will have a positive and lasting impact on young people's lives as they strive to quit smoking. We were excited to collaborate with the different stakeholders to help make this dynamic new mobile app come to life.

"It was great to be able to work so closely with the young people involved in the R2Q app's development and get their buy-in from the beginning. Our workshop provided a host of insights, from both the young people and the NHS, that without in-depth stakeholder research may have otherwise not been captured so effectively.  This has ensured that the final product appeals to its target audience and will meet their needs moving forward."