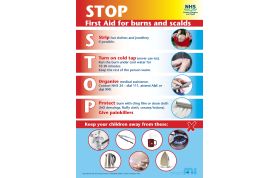 An important new public health campaign launched today by NHS Greater Glasgow and Clyde (NHSGGC) will provide parents with vital advice on effective first aid should their child sustain a burn or scald.

Each year the A&E department at the Royal Hospital for Sick Children (RHSC) treats approximately 450 children with burns or scalds injuries. Around one third of these children are admitted for further medical care due to more extensive or deeper injuries.

The ‘STOP’ campaign will raise awareness amongst parents of four simple actions that should be taken if a child suffers a burn or scald.

The ‘STOP’ stands for:
S – Strip hot clothing and jewellery if possible
T – Turn on cold tap and run the burn under cool water for 10 to 20 minutes
O – Organise medical assistance Contact NHS 24, attend A & E or dial 999
P – Protect the burn with cling film or a clean cloth but not dressings, fluffy cloth, creams or lotions.

Health visiting teams across Greater Glasgow and Clyde will be giving all parents or carers of under-fours a fridge magnet displaying the four steps and this will be backed up with extensive poster distribution in venues such as libraries, pharmacies, pre-five centres, leisure centres and schools.

Dr Gregor Walker, Consultant Paediatric Surgeon at RHSC, explains: “Most of the children we treat are under four years of age and have suffered a scald by reaching up and knocking a hot drink over themselves. While we encourage parents to think about how such injuries could be prevented, we want to spread the message that if a child does suffer a burn or scald, effective first aid is the best way to limit the extent and depth of the injury.

“We know that the first instinct for parents is to get their child to hospital but, if the child is not seriously injured, immediate cooling of the burn at home can prevent more serious injury. Rinsing the injured area under cool running water for 10 to 20 minutes is recommended, and this is often achieved more easily in many households compared to in a hospital setting. However, in a recent audit less than one third of children received effective first aid before arriving in the emergency Department.

“Cooling a burn is useful up to an hour fter the burn or scald has happened.”

Lesley Nish, Senior HI officer, NHSGGC Public Health said: “A burn or scald is a painful injury and unless it is a very small burn or scald, it will usually involve attending A & E where the injury can be treated. However, for some children, if their injury is more severe this may involve a stay in hospital, skin grafts and then longer-term treatment.

“We have worked with parents, carers and our Health Visiting teams to develop the campaign. Parents / carers told us that they liked the STOP acronym, it was easy to remember and they suggested a fridge magnet can be kept and used at home at any time. Our Health Visiting teams were very keen to have the magnets to use as part of their discussions about keeping babies and children safe at home”.

Linda Wilson, Health Visitor in NHSGGC, comments: “We see families on a daily basis so we are ideally placed to hand out the fridge magnets to parents. We will also speak with parents to explain the first aid advice but also provide practical advice on how to prevent the burns and scalds which can easily happen in the home.

“We hear from parents all the time that they thought the mug of tea was out of reach or that they only took their eyes off the child for a second. We help to advise on safety and prevention and then if the worst does happen, parents will have the information available to them on how to reduce the seriousness of the injury.”

Sharon Ramsay, Nurse Burns Specialist at RHSC, also adds: “It is important that burns and scalds are not treated with anything other than cool running water. We have seen children come into A&E whose parents have applied ‘remedies’ such as toothpaste, ice-packs and creams.

“Unfortunately none of these will help a burn or scald, ice may actually worsen the injury. The only way to help the burn is to run it under cool water for between 10 to 20 minutes and then apply a loose sheet of cling film over the burn and bring them to hospital.”

Carlene McAvoy, community safety development officer for RoSPA Scotland, said: “Accidents are the UK's biggest killer of children, with under-fives being most at risk in the home, particularly when it comes to scalding from hot drinks.

“A child’s skin is much more sensitive than an adult’s and a hot drink can still scald a child 15 minutes after being made. Recovery from a burn or a scald can be a long and painful process and can leave permanent scarring.

“We would encourage parents, grandparents and carers to start looking around their home, particularly the kitchen, from a child’s viewpoint; get down on the floor to help spot hazards well in advance.”

CASE STUDY
One family who knows only too well how serious a scald can be is the Skilling family from Ayr. In 2009 three-year-old Richie Skilling was playing in the garden while a cup of tea was being prepared in the kitchen.

Mum Kirsty explains: “The cup of tea was placed on a worktop which was out of reach of Richie. But the cup was sitting on a table cloth and when Richie came in from the garden he pulled on the bottom of the tablecloth – which pulled the cup of tea down over his head and shoulders.

“It was absolutely horrendous, we rushed him to Crosshouse Hospital for treatment where he was kept in for a night. Although he was discharged we ended up having to take him back a few times before he was referred to the RHSC, Yorkhill.

“He was kept in for the next two weeks and had to undergo various operations under anaesthetic three times - one of which was a skin graft. They took skin from his leg for the wound on his shoulder.

“I have to say that the care he received at the RHSC was fantastic and I am thankful to them for Richie’s recovery.”

Richie, who is now eight, describes his experience to other children as ‘having skin taken from his leg to make a plaster for his shoulder.”

Kirsty adds: “It was a terrible experience, Richie had to wear a pressure garment for 23 hours a day for 22 months after the accident. We also had to make sure we massaged cream into his wound four times every day.

“Thankfully this seems to have helped and although he is left with a slight scar you wouldn’t really notice it. We still go for yearly checkups just to make sure the skin graft is still okay.

“I would add that while accidents do happen I absolutely back this awareness raising campaign. People just don’t know about the correct first aid advice and I think these handy fridge magnets may help parents if the worst does happen.”