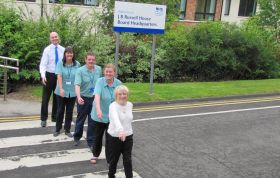 The Glasgow 2014 Commonwealth Games will attract some of the world’s top athletes, challenging them mentally and physically.

NHS Greater Glasgow and Clyde (NHSGGC) has challenged its staff and staff from Glasgow City Council (GCC) to beat the 1.6 million steps it will take the Queen’s Baton to travel across Scotland.

A total of 4,381 staff, working in teams of up to five people, from NHSGGC and GCC have taken up the 2014 pedometer challenge and have been walking everywhere for the last six weeks.

The challenge, which ends Sunday, July 20th, was to walk as many steps as the Queen’s Baton would take to travel the 1,100 kilometres (680 miles) across the length and breadth of Scotland and the teams have already surpassed 1.6 million mark.

Over 700 teams registered to take part in the challenge and one team, the Revenge of the Sprouts, based at NHSGGC Board headquarters have managed more than 680,000 steps between them.

Rhona Bray, Receptionist at Board headquarters, is part of the Revenge of the Sprouts Team and has done over 190,000 steps herself.

Rhona said: “I did last year’s pedometer challenge and enjoyed it so much I have continued walking throughout the year so it made sense for me to sign up for this year year’s challenge.

“I am really pleased with the walking I have done over the last few weeks. Being active is important and walking has lots of benefits both for your physical and mental health.”

Fiona Malcolm, Active Staff Co-ordinator, NHSGGC, said: “It’s great to see so many teams taking part in the challenge. This year, to make the challenge more interactive, we have developed a website and a smart phone app. Teams can track their own and other team’s progress, encouraging a little bit of friendly competition.

“We have encouraged all participants to aim for approximately 10,000 steps each day in order to gain the greatest health benefits. However, for those who were sedentary prior to the challenge any increase in physical activity will be beneficial.”

Pic:  The Revenge of the Sprouts Team put their best foot forward