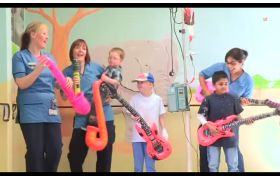 A heart warming YouTube video featuring patients and staff from the Royal Hospital for Sick Children in Glasgow performing the Proclaimers’ I’m On My Way has become an internet sensation.

Since going live a week ago, the video has already been viewed more than 13,500 times.

Patients ranging in age from just months to 14 years took part in the fun ‘performance’ as part of celebrations to mark 100 years of healthcare being delivered on the Yorkhill site.

The Proclaimers themselves have welcomed the video describing it as “beautiful” and today spoke of their pride in the song being linked to the hospital. Brothers Craig and Charlie Reid said: "A beautiful video. We are very proud to have our music associated with The Royal Hospital for Sick Children in Glasgow. Thank you for all your brilliant work and best wishes to all who took part in the film."

The feel good video was the brainchild of Jennifer Rogers, Lead Nurse for Paediatrics at the hospital. Jennifer explained: “We wanted to do something different to celebrate 100 years of health services on the Yorkhill site as we look forward to moving to new children’s hospital on the New South Glasgow Hospitals campus next year.

“We’ve been overwhelmed by the early response with so many people viewing it and telling us how much they like it.

“The filming itself was so much fun, everyone was smiling all day and the kids had an absolutely brilliant time. The fact they enjoyed it so much comes across very clearly in our video – they look really happy. For many it was a great distraction from some gruelling treatments for cancer and other serious illnesses.”

One of the stars of the video is five year old Grace Newton from Grangemouth. Grace was diagnosed with Ewings Scarcoma, a rare form of cancer, and was in the hospital for four months receiving intensive chemotherapy. Her Mum, Janet Newton (28), said: “Grace loves dancing and singing and has competed in a number of competitions so when the opportunity to take part in this video came up the nurses thought of her straight away. She had a fabulous day filming and was thrilled to be a part of it. She has also particularly enjoyed showing her big brother her performance on screen!”

Staff from across the hospital also took part and the video shows nurses, doctors, physios, dieticians, domestic staff and managers having just as much fun as the patients.

The video - funded by the Scottish Government - was first shown at a recent NHS Scotland conference at the SECC in Glasgow and was an immediate hit.

Jason Leitch, Clinical Director, The Quality Unit, Scottish Government, said: “This is a really inspiring, heart-warming video and I’m not surprised it is really popular. Importantly it also gets across the caring, supportive and positive atmosphere that the tremendous staff at the Royal Hospital for Sick Children create. They put the children in their care at the heart of everything they do – asking what matters most to them and then planning their treatment carefully on that basis. I was just delighted to be able to support this video and help more people learn about the fantastic things that happen at the hospital.”
The staff would also like to thank The Proclaimers for the use of their song I’m On My Way.

You can watch the video by clicking on this link. http://www.youtube.com/watch?v=CO8MhtoZ3yQ&feature=share&list=PL6BVP-BD8IY7loAUWuXQT0G83GXnQkeIj&index=4