A Teddy Bears Tale for Parents Who Smoke 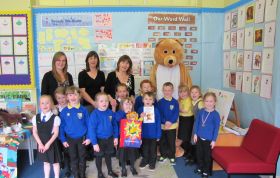 Pupils at Twechar Primary have been presented with a teddy bear in a local competition which teaches children about secondhand smoke.

Primary classes across East Dunbartonshire were invited to take part in the ‘Jenny and Bear’ competition which features a colourful story book about secondhand smoke and asks the children to put forward a name for the bear in the book.

Class P1/2 at Twechar Primary came up with the name “Isabelle” for the cuddly character in “Jenny and the Bear”, and were judged the winners.

The idea is that the story book is taken home by the children who can read it with their parents who hopefully pick up the message that secondhand smoke around their children can cause health problems.

The tale begins with Jenny being bought the bear as a treat from her Granny, and goes on to describe how her parents’ smoking at home and in the car makes her cough and the bear’s “nose” becomes “blocked” and his throat feels “very jaggy.”

Towards the end of the story Jenny’s cough is so bad that her mother takes her to their GP who suggest that her parents stop smoking in their home and smoke outside.

Sandra Cairney, Head of Planning and Health Improvement for East Dunbartonshire CHP congratulated the pupils at Twechar Primary School, and hopes that the pupils together with their parents or carers enjoy reading about Jenny. However, the real message is aimed at supporting parents and carers "to protect their families health by making the home and the car smoke free.

Sandra added: “The idea is that the story book is taken home not just for parents to read to their children, but also for them to hopefully pick up on the message that smoking around their children can cause health problems.

“The back page of the book carries some hard hitting facts and figures about why cigarettes can have an adverse affect on children which we hope parents will also pick up on.

“This includes the fact that children are more at risk because their lungs are still growing and immune systems are not fully developed.

“It also explains that poisonous substances from the 4000 chemicals in every cigarette can remain in a room or car for months, the fact that children who live with smokers are three times more likely to smoke themselves, and frighteningly children can breathe in around 150 cigarettes a year when adults smoke around them.”

The back page also offers advice and where to find help if they want to quit smoking by calling Smokeline on 0800 84 84 84 or visit the website – www.nhsggc.org.uk/smokefreeservices

The project is part of NHSGGC’s campaign to raise awareness of the dangers of secondhand smoke exposure in the home and car, in particular towards children.

“This story has clearly captured their imagination and they've shown great creativity in coming up with such a good name. This really is an effective way of learning and demonstrates the benefits of partnership working to improve health for all."

For further media information either telephone 0141 201 4429 or email: [email protected]