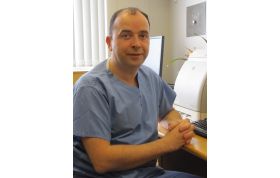 SEPSIS is an intolerable and indiscriminate killer of people of any age, background and social status. It kills 37,000 people a year in the UK and causes more deaths than lung cancer or colon, breast and prostate cancer combined.

Now a new app has been produced to help staff across Greater Glasgow and Clyde spot the signs and symptoms of sepsis and quickly begin the appropriate treatment.

With NHSGGC clinical staff leading the way in the development of the app, it has now been approved for staff to use locally, and nationally, and has the potential to positively influence clinical decision making.

He said: “Prompt recognition, assessment and timely treatment are key to beating this ruthless disease. Rapid initiation of simple timely interventions, including antibiotics and intravenous fluids, can reduce the risk of death by half.

“The Sepsis Screening app plays a vital role in this response by facilitating the three ‘Rs’ of the ‘deteriorating patient’ work, namely Recognition, Rescue and Review.”

Sepsis is a life-threatening condition that arises when the body’s response to infection injures its own tissues and organs. It may lead to shock, multi-organ failure and death, especially if not recognised early and treated promptly.

He added: “The app has the ability to prompt clinicians to screen for sepsis as a possible cause of this deterioration.”

Malcolm Wright, Chief Executive Officer, NHS Education Scotland, said: “The app is also designed to help clinicians screen for organ dysfunction, helping them to determine where the patient should be cared for and what next steps should be done.

“Every three to four seconds, someone dies of sepsis. Our aim in NHS Scotland is to change that. This app enables frontline staff to follow evidenced-based practice and deliver care that is not only safe, but effective and person-centred.”

Notes to Editors
The NHS Scotland National Early Warning Scoring (NEWS) system and Sepsis Screening app is part of NHSGGC’s Knowledge into Action strategy and provides a NEWS calculator, a sepsis screening tool, an outline of the sepsis six care bundle and finally an algorithm to help identify organ failure, with guidance on when to escalate care for that individual patient.

>> For further information on the app, visit: www.youtube.com/watch?v=t0nEnAOsmo&feature=youtu.be