Act of kindness all the way from Australia 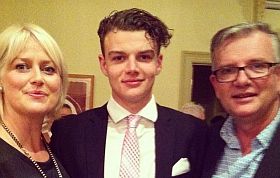 An Australian family has reached out over ten thousand miles to make an amazing offer to renal paediatric patients in Glasgow.

Louise (48) and Richard (56) Creaser from Melbourne in Australia organised a trip of a lifetime to Europe to celebrate their 20th wedding anniversary in April and planned to take their three sons with them – Sean (18), Henry (15) and Maxwell (11).

During the trip the family planned to stop off in Glasgow and as a special treat, they bought tickets to see their favourite band Elbow at the SSE Hydro on 5 April. However disaster struck when Sean, who was born with posterior urethral valves and had undergone a kidney transplant in 2011, became unwell shortly before the trip.

Louise said: “We always knew that Sean would one day need a kidney transplant so my husband Richard donated his kidney at the end of 2011 to allow Sean time to recover before he went to University. But at the beginning of this year Sean’s body started to reject his new kidney and he started to become unwell.”

Sean ended up having to undergo treatment to stop his body rejecting the kidney and spent some time in a dialysis ward. Sean and his family saw first-hand the effects of daily dialysis on young renal patients and their families.

While the trip had to be cancelled, the family took the decision to try and track down renal patients in Glasgow who they could donate the Elbow concert tickets to. Louise took the time to research the Royal Hospital for Sick Children at Yorkhill and got in touch with the renal transplant co-ordinator to make the kind offer.

Diane King, Transplant Co-ordinator the RHSC, got in touch with renal patients and ended up managing to arrange for 13-year-old Reiss Martin and his family from Barlornock in North Glasgow to attend the concert.

Diane commented: “This was such a lovely offer and for a family to have taken the time and effort to get in touch when Sean was going through a difficult time with his health just makes it all the more special. I was more than happy to assist and I knew Reiss would enjoy the concert.”

Reiss was born with chronic renal failure in October 2000 and received a live kidney donor transplant from his mother Lesley in February 2005.

Reiss’s father Frank commented: “Reiss’s condition obviously has had a major impact on his life but he has always dealt with his health issues amazingly.

“This was a wonderful opportunity to take him to a major event and we had a terrific night. Although Reiss enjoyed the night, he spent more time on his ‘phone telling people where he was and taking photos.

“This night will be a wonderful memory for us, and was made possible due to the wonderful kindness of the family that donated the tickets.”

Louise added: “The time we’ve spent in the dialysis ward with Sean having his plasma exchange has been such an eye-opener. To think that some children and their families endure that for years is very humbling and it brought it home to us that all over the world there are kids and families going through some of the same things as we are.

“My perspective has also been changed by Sean's new interest in promoting organ donation awareness and his keenness to be well enough to compete at the Transplant Games. So I guess now we feel (on some level) part of a transplant ‘family’.”

People can sign up to the organ donation register at www.organdonationscotland.org