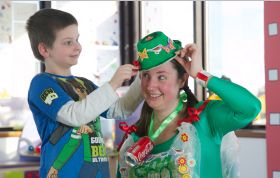 Patients at the Royal Hospital for Sick Children are going for green as they gear up to celebrate “Climate Week” which runs from today (March 3) through to Sunday.

The youngsters have created an imaginative EcoWarrior costume for NHS Greater Glasgow and Clyde (NHSGGC) Energy Manager Gillian Brown to wear, made up of examples of items we can all recycle.

Gillian will wear the eye-catching outfit as she tours a number of NHSGGC acute hospital sites over the next few days spreading the climate change message to staff.

Yorkhill patients have also designed a poster urging staff to switch off office equipment and will feature in an old fashioned film strip in pictures showing them taking public transport, cycling and walking, and holding signs proclaiming that they are taking these actions to save the planet.

The photos will be widely publicised throughout NHSGGC and will no doubt inspire both staff and parents to press the off button on non-essential equipment at work and at home.

Elaine Love, Head of Nursing Neonatal, Children and Young People's Services, Women and Children's Directorate, said:
“I am very impressed with the imagination and enthusiasm shown by our young patients in promoting this key event.

“As Scotland’s biggest health board we want to be leading the way to become more sustainable and it is important that the next generation become increasingly aware of the need to treat our planet with respect.”

Gillian added: “The children and staff have been great to work with, and their ideas and knowledge of green issues has been inspiring.

“I’m looking forward to wearing my colourful warrior costume and I know that it will attract a lot of comment and questions from staff.”

NHSGGC staff have also organised events to promote “Climate Week”, including EcoSwap Shops where unwanted items can be swapped for something different.
And during the week if staff produce their public transport ticket they can buy a hot drink for 50p at all staff dining areas.

The “green” catering theme continues on Thursday, March 6, when the “special” on staff canteen menus is a low carbon lunch of a beef and vegetable hot pot, with all ingredients locally sourced.

NHSGGC has been making steady progress in reducing carbon emissions and energy consumption.

All Boards were set a target back in 2009 to reduce energy consumption by one per cent every year until 2014/15 as a milestone to achieving an overall improvement by 2050 of 30% on the comparative performance as at 2009/10.

For carbon emissions the target is to reduce CO2 emissions for oil, gas, butane and propane usage based on a national average year-on-year reduction of three per cent by 2014/15 as a milestone to the elimination of the use of fossil fuels by 2050. Since 2009/10 we have reduced our CO2 emissions by just under 3,000 tonne and continue to strive to meet this target.