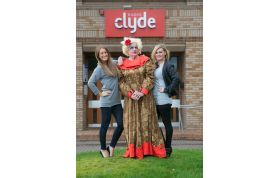 The stars - Radio Clyde’s Suzie McGuire and Knoxy - have given their backing to a new hard hitting campaign launched today by NHS Greater Glasgow and Clyde.

The ‘Smear’ campaign aimed at women aged between 20 and 35 years of age, which incorporates humour with a serious health message, aims to tackle the main barriers stopping women from attending cervical screening (smear test).

“The ‘Smear’ campaign hopes to alleviate the fear women feel about going for the test and tackle the myths that smear testing is painful and embarrassing.”

With three humorous videos, which discuss smear tests using language women can relate to, posters, radio play and promotional cards the campaign wants to address the fears of women and change how women feel about attending for a smear test.

Emilia added: “It really is important that women take up the invite to have a smear test every three years as it could potentially save their lives.

“Many women ignore this invite with the 20 to 35 year old age group being the most persistent offenders and embarrassment and pain being the most common reasons for women not attending.
“The ‘Smear’ campaign is aimed at women in this age group and we would like them to watch the three videos where women discuss smear tests in the way women do in ordinary life - the videos are available online at http://www.youtube.com/watch?v=bVoq6FKw840, read the information and arrange an appointment with their GP or local sexual health clinic.

“Please do not ignore the invite for a smear test as it only takes five minutes and saves around 5000 lives in the UK every year.”

Suzie McGuire, Radio Clyde DJ has thrown her weight behind the campaign. She said: “I have always found my smear tests to be quick and easy.

“The GP’s and nurses have always been extremely discreet and I’ve never found the experience to be in the least embarrassing or even slightly painful.

“Any sense of anticipation is far outweighed by the peace of mind that comes with an all clear result.

“With eight out of ten cervical cancer cases being treatable if discovered early enough, I would urge every female out there to make an appointment asap and see for yourself how surprisingly effortless is it and perhaps save your life in the process!”

Case Study
Christina Chappell, 30 years old, has arranged a smear test with her GP practice every time she has received an invite.

Every smear has tested normal so she wasn’t worried when she attended her GP last May for her routine test.

One week after her test she was asked to attend hospital as her smear test had shown some abnormal cells.

Christina was initially unfazed but she was seen by a consultant who explained that her smear had tested for pre-cancerous cells and they wanted to undertake a colposcopy.

Christina, who is fully supporting the ‘Smear’ campaign after her experience, said: “I had regular smear tests and when I went last May never expected there to be problem.

“Having been diagnosed with early cervical cancer I would encourage young women to take up their invite for a smear test.

“There is absolutely nothing to be embarrassed about and the practice staff do everything to make it as easy as possible. It is uncomfortable but certainly not painful and worth taking five potentially life-saving minutes out of your day to get the smear done.”

Notes to Editors
Every year in the UK, 5,000 women are diagnosed with cervical cancer and nearly 1000 women die from the disease. That’s three women every day.

Figures from the Public Health Screening Programmes Annual Report show that only 75.1 per cent of women who are invited for a cervical screening have taken up the offer. And in some areas of Glasgow these rates drop as low as 65.7 per cent.