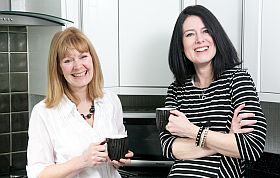 An inspirational woman from Ayr has given the ultimate gift to her gravely ill sister-in-law - donating her own kidney to a stranger to save her relative’s life.

Mum of two, Claire Heathcote (41) has suffered from a form of kidney failure called Adult Polycystic Kidney Disease since birth.

Because of the hereditary disease, Claire has experienced ill-health for most of her life, however in recent years her health began to deteriorate until last Christmas when her kidney function was working at only eight per cent of that of a healthy kidney.

Unfortunately kidney dialysis was not a straight forward option for Claire which left organ donation as the only option.

Claire’s family members were tested in the hopes of donating a kidney but were unsuitable matches. However, at a meeting with her clinician Claire found out about kidney pairing.

Claire said: “This innovative way of donating a kidney gave us hope. I was at a meeting with my doctor and we were discussing future treatment options. By chance he happened to mention ‘kidney pairing’. I had obviously heard about organ donation but I hadn’t heard of kidney pairing.”

The family began investigating kidney pairing as an option for Claire and after undergoing some tests Sue found that her health and kidney function were ideal to allow her to volunteer for the register.

A computer in Bristol stores details of all the participating donors and recipients from the UK with the hope of a match. Every three months the computer runs a check to see if any new donors match with existing details on the register.

Sue said: “I was absolutely thrilled that I was able to register. I thought at first I wouldn’t be accepted as I am blood group A negative which is not very common so there possibly wasn’t going to be a demand for my kidney.

“We did not get a 'match' in our first run in October, or January or April 2013. However, in July last year Claire got a call to say that we had 'matched'. An altruistic donor had kindly donated to the 'pairing pool' and their kidney matched with Claire. I still had to agree to donate my kidney as the altruistic kidney was in the pool and therefore someone would still need mine.

“Claire and I went in to the Western Infirmary in Glasgow on 26 September 2013. It was slightly scary but was such a good opportunity to help Claire and I was absolutely ecstatic to be able to do this. We had our operations the next day on 27 September.

Sue added: “I had to take it easy after the operation and returned to work after about six weeks. It took Claire slightly longer to recover as her body had to get used to its new kidney. But she was back at work after about eight weeks and even better – her kidney function test showed that her new kidney was working at 43 per cent which was amazing considering it had been as low as eight per cent.

“It’s made such a difference to Claire’s life and I was so happy to do this as she is the type of person who would have done it for me.

“I would absolutely appeal to everyone to consider registering for kidney pairing. You only need one working kidney to survive and you could be helping other people who may not have another option.”

Mr Marc Clancy, Consultant Transplant Surgeon and NHSGGC Lead Clinician for Transplant, said: “With so many people dying each week in the UK because there are simply not enough organs available, this relatively new way of donating a kidney is extremely welcome.

“It is fantastic that both Claire and Sue are doing so well after their operations and I would echo Sue’s appeal for people to consider being altruistic kidney donors and contributing to the pairing pool – who knows, you could be giving the gift of life to someone.”

Public Health Minister Michael Matheson said: “Stories such as Sue and Claire’s remind us of the generosity and thoughtfulness of those who donate their organs for the purposes of transplantation. It says a lot about human nature that people are prepared to put the needs of others first. Sue’s case shows how kidney pairing can transform more than one life.

“Put simply organ donation saves lives and it is so important that those who want to donate puts themselves on the NHS Organ Donor Register or make their wishes known to their family. We have seen great progress in Scotland in the last few years with a significant increase in donations and over 41% of people now on the Organ Donor register – the highest proportion of any of the UK countries.”