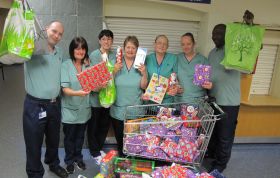 Seven domestics, based at Clydebank Health Centre, have so far collected more than 200 gift wrapped selection boxes for delivery to the local women’s refuge.

Lillian Stevenson, one of the organisers, said: “We all have families so we know how hard things are, especially at this time of year.

“The selection box appeal means that kids have something to open up on Christmas Day
“Everybody in the health centre has been amazing when it came to donating.

“We just said bring in a £1 selection box but people have been handing in two or three.”

And the magnificent seven are also collecting for the Greater Maryhill Foodbank, inspired by one of the health centre’s practice nurses, Phyllis Littlejohn, who ran a 10k race earlier this year.

Lillian went on: “Phyllis asked staff that rather than sponsoring her to donate to the foodbank instead.

“We placed collection boxes in the centre and they very quickly filled up.”

While Lillian and her colleagues had heard of foodbanks, she didn’t realise how many people rely on them:

“At the end of the day no kid should be without. It is ridiculous in this day and age.

“I didn’t realise foodbanks weren’t just for the unemployed, people on low incomes also rely on them. This really needs to be highlighted.

“I would hate to think that my kids are there waking up to no breakfast or dinner, it’s heartbreaking.

“A wee18p packet of noodles will feed two children, that’s a hot meal for some families.”

“Think about your own family and what they would like to wake up to on Christmas morning, you would not like them to wake up to nothing.”

“Just think about what you would use in your own home,” added Lillian.

She summed up: “If you are working and you lose your job everything crashes round about you.

“At the end of the day people never know when they might have to go to a foodbank, you never know what’s round the corner.”
And the Christmas spirit doesn’t stop there, hotel services staff at Gartnavel Royal Hospital are also gathering donations for a local food bank between December 1 and 14.