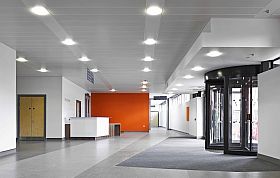 A new state-of-the-art £15 million laboratory which has just opened at Glasgow Royal Infirmary (GRI) has already been highly commended in the Design Award category by NHS National Services Scotland.

The new Lister Laboratory is named after Joseph Lister who is famous for his ground breaking work in the prevention of wound infection.  He worked at GRI between 1861 and 1869 and his work during this time with carbolic acid changed the face of surgical procedures making it much safer for patients.

In 1911 the pathological institute at GRI was renamed the Lister Laboratory in his honour and since then has continued his pioneering work.

Following a multi-million pound refurbishment the laboratory is continuing Lister’s tradition of pioneering clinical excellence. State-of-the-art equipment, facilities and décor has transformed the building for the staff and patients.

It provides a modern new home for Clinical Microbiology, the West of Scotland Specialist Virology Centre, relocated from Gartnavel General Hospital and the Scottish Microbiology Reference Laboratories (Glasgow) which has relocated from the Stobhill campus.

The Lister laboratory refurbishment completes a package of investment of some £200million in the past three years in modern laboratory services for NHSGGC and comes just two years after the opening of a new £90 million laboratory in the south of the city as part of the new £842million New South Glasgow Hospital project.

The lab is located in the GRI’s New Lister Building (formerly known as the University Tower). The refurbishment also includes two floors for University of Glasgow.

NHS laboratory services are based on levels four and five of the building with University of Glasgow on levels two and three.

Level four hosts Clinical Microbiology which deals with approximately 400,000 specimens per annum requested by hospitals and GPs in the North of Glasgow.

“Laboratory services in Glasgow and Clyde are undergoing significant improvements in both accommodation facilities and equipment replacement.

“The refurbishment of the New Lister Building at Glasgow Royal Infirmary is the final phase in the current strategy delivering modern, state-of-the-art lab facilities for the people of Glasgow and Clyde.

“This combined with the new building on the Southern campus and our successful Managed Service Contract whereby equipment is being refreshed when needed, will ensure our medical and technical staff within our laboratories continue to meet the changing and future needs of our patients.”

Photos
Before
Photo supplied by the architects of the new building, Armitage Associates
Lab interior before 2 – Before the refurbishment

After
Main entrance after – photos supplied by Cadzow Pelosi. The new entrance welcomes visitors into a bright and airy environment
GRI Uni Tower inside – the new lab environment is completely transformed