Patient Thanks Docs With Thousands of Pounds Donation 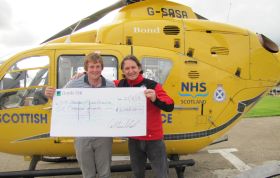 One of the first patients whose life was saved by the Emergency Medical Retrieval Service (EMRS) has thanked the doctors involved in saving his life by making his second donation to the service.

Callum Wark, 23 years old, had life-threatenting injuries following a car crash in 2009. Paramedics were called to the scene and established that Callum would need critical care before being moved to hospital. The newly established EMRS were called and ensured Callum was stabilised before being moved to intensive care at the Southern General Hospital.

Callum, who spent two months in hospital, has now made a full recovery and wanted to thank the doctors who he insists saved his life. He has sepnt the last couple of years fundraising for the team and donated over £2,000 last year. Yesterday he handed over a second cheque for £6,000 to Dr Neil Dignon and Dr Stephen Hearns from the EMRS team.

Callum said: “Since recovering from the accident I wanted to give something back to the doctors who saved my life. With the help of my family and friends I have been fundraising for the team for the last couple of years.

“I am sure I would not be here if it wasn’t for the care I received from the doctors on the team and it is my hope that I can make a donation to the service every year.

“I would also like to thank the paramedics who attended the accident and the staff who looked after me at the Southern General.”

Dr Neil Dignon, who was one doctors who attended the accident, was delighted to accept Callum’s cheque.

He said: “The team are delighted that Callum has made a full recovery and are extremely grateful to him and his family for all their fundraising efforts.”

Notes to Editors
The EMRS provides rural clinicians with 24 hour access to a consultant in emergency medicine or intensive care with specialist aeromedical training.

The EMRS team are able to respond, via plane or helicopter, within minutes of a request and can also provide specialist advice to rural clinicians.

EMRS is a collaboration between NHS Greater Glasgow and Clyde and the Scottish Ambulance Service, funded by the Scottish Government.