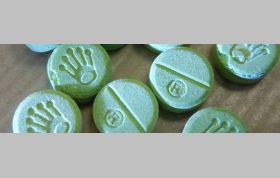 Police Scotland and NHS Greater Glasgow and Clyde are issuing a warning about the dangers of tablets being sold as ‘ecstasy’ which contain dangerous chemicals.

Police are currently investigating a number of deaths which have occurred over the last two months where the victims appeared to have ingested what they thought was an ecstasy tablet but actually contained toxic stimulants.

An investigation is underway and our enquiries have so far revealed that the taking of what users thought was ‘ecstasy’ is a common denominator.

Emergency doctors in Greater Glasgow and Clyde are joining police in issuing this warning following the rise in the number of drugs related deaths in young people.

“This is clearly disturbing and we are taking the matter extremely seriously. We are currently carrying out extensive enquiries in relation to these incidents. Drugs are being sold as ecstasy tablets but they contain a cocktail of ingredients which have and can endanger life. These drugs are unstable, unpredictable and extremely dangerous and we want to highlight the very serious and potential harm which can be caused.”

Of particular concern at the moment are green tablets with a Rolex crown logo stamped on them, some of these tablets have been found to contain PMA.

Previously we have warned of other tablets being sold as ecstasy which included the white tablet which has the Mitsubishi logo imprinted on it. This pill was found to contain the potentially dangerous chemicals, 5IT or AMT. We are also warning of a yellow tablet with a star logo imprinted on it containing a toxic stimulant, PMA.

“People are coming into A&E who have taken what they believe to be ecstasy but in some cases the drug is actually something else containing a highly toxic chemical formula which is proving lethal.”

All individuals in the Greater Glasgow and Clyde area presented in hospital at a stage of toxicity which was too late for treatment. The majority of those who died were in their early 20s.

Dr Stevenson explained:  “All the fatalities were due to symptoms which are treatable if help is sought early – sadly in these cases they all came into A&E too late.

“Symptoms include a high temperature, aggression and muscle pains as well as an extreme exaggerated expected effect of the drug such as hallucinations and excitability which would be very alarming and unpleasant to the person experiencing them."

Dr Stevenson added: “These symptoms are treatable if help is sought early I would urge anyone who begins to feel unwell or feels a more intense high than usual after taking any drug which they think is ecstasy or not to seek immediate medical help.”