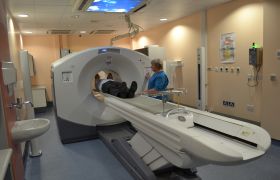 Proposals to create a new state-of-the-art radiotherapy facility for the West of Scotland have moved a step forward following the development of outline plans which have now been submitted to the Scottish Government.

The Outline Business Case (OBC), which is supported by the four West of Scotland NHS Boards, highlights the clinical requirement for this new facility which will help meet rising demand for cancer treatment over the next ten years.

It also outlines how it could be delivered on the Monklands Hospital site in Airdrie, which is the preferred location, and describes the potential future workforce and operational arrangements.

The OBC, which was formally submitted on 5th July 2013, will now be considered by the Scottish Government with a decision expected in August 2013. If approved, a more detailed Full Business Case would be developed and submitted for final approval in early 2014.

Construction could then start in Spring 2014 and the new facility could be operational by the end of 2015.

Heather Knox, Chair of the West of Scotland Satellite Radiotherapy Project Board, said: “The submission of the Outline Business Case is a significant step forward and highlights the considerable work which has been carried out over the last few months by NHS staff across the West of Scotland to progress plans for this important new facility.”

Notes to Editors
The proposed new West of Scotland radiotherapy facility would operate as satellite for the Beatson West of Scotland Cancer Centre in Glasgow. It would be equipped with the most advanced technology to deliver the same world-class treatment and techniques currently provided at the Glasgow cancer centre and is expected to treat around 120 patients a day from across the West of Scotland who require radiotherapy for lung, breast, prostate and rectal cancers.

A design brief, setting out some of the key layout and design requirements for the new facility, has also been developed. This highlights existing good design practice and outlines the type of internal and external features required to create the best possible environment for patients and staff.

Copies of the Outline Business Case, Initial Agreement, Design Brief can be found on the business cases section of the NHS Greater Glasgow and Clyde website /about-us/nhs-board/finances-publications-reports/