Bold No Smoking Campaign Rolled Out to RAH 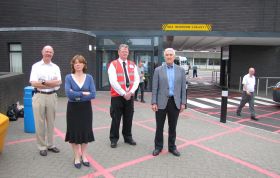 The hospital’s main entrance has been rebranded hospital with bright red obtrusive ground hatchings and giant posters creating a no smoking zone which is impossible for smokers to ignore.

Wardens are also patrolling the site to reinforce the zero tolerance message when people are seen breaching the no smoking policy. The wardens will also offer information to smokers as to where they can get help to quit or manage their smoking whilst on hospital grounds.

The campaign has also seen us invest £200,000 in creating a new fully enclosed entrance at the hospital which will reclassify it as an internal public space where, under the terms of the smoking in public places ban in 2006, it will actually be illegal for people to smoke.

Since the new measures were introduced hospital staff at the RAH have already reported a marked reduction of smokers on the hospital site, particularly at the entrance.

The “Smoking on hospital grounds - we’re all sick of it” campaign has been widely welcomed by doctors, nurses, patients, visitors and ASH Scotland.

Dr Linda de Caestecker, NHSGGC Director of Public Health, said: “Our staff, patients and visitors are rightly fed up with having to ‘run the gauntlet’ of getting through plumes of smoke when entering our hospital sites. In response we have lunched this ambitious campaign with the very clear and simple message that smoking on our grounds and at our entrances simply will not be tolerated.”

Welcoming the campaign, Dr Lindsay Erwin, Consultant Respiratory Physician at the RAH, said: “Smoking outside our hospitals is not just unpleasant but the second hand smoke moves through windows, air ducts and lift shafts to contaminate our wards. We also need to try as hard as possible to encourage people to stop smoking and hopefully interventions like these in the hospital grounds will help. I give my full backing to this very timely and important campaign.”

John Wilby, Vice Chair of the Renfrewshire Tobacco Alliance, also welcomed the campaign. He said: “Nowhere more is it inappropriate to smoke than at the entrance of a healthcare facility. People who are sick and attending for treatment should not have to breathe in someone else’s smoke and we know that this has been a problem at the RAH for many years. I hope all those people who use the hospital and who smoke take notice of the campaign and think twice before they light up on hospital grounds.”

The RAH is one of 11 of NHSGGC’s main acute hospital sites to have its entrance rebranded.