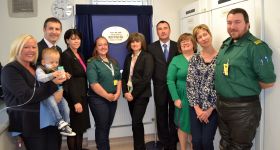 NHS Greater Glasgow and Clyde’s expanded donor milk bank has been officially opened by the Minister for Public Health Michael Matheson at its new home in the Southern General Maternity.

The newly expanded milk bank will allow donor milk to be offered to an increased number of babies from across Scotland.

A donor milk bank has been operational in Glasgow since 1978 at the Royal Hospital for Sick Children handling milk from some eight to 12 donors annually helping up to 16 vulnerable babies per year.

However the milk bank has reported a significant expansion in its service over the last three years, both in terms of the processing of donor milk and the number of babies who receive milk.

Opening the new facility, Mr Matheson said: “These excellent new facilities in Glasgow will ensure sick and premature babies across Scotland can benefit from the valuable service that donor milk banks provide.  We want to make sure that our most vulnerable babies have the best possible start in life, and the best way to do this is through the health benefits that breast milk can provide.”

The new expanded milk bank at the Southern General Maternity has been made possible thanks to funding from Yorkhill Children’s Charity enabling the relocation and refurbishment of the facility.

The Charity has also supported the Scottish Emergency Rider Volunteer Service which assists with the collection and delivery of donated milk.

Clinical lead for the donor milk bank, Dr Judith Simpson, explained:  “The benefits of mothers own breast milk for all babies has been well documented.  However for some babies, particularly those who are very premature or who have undergone abdominal surgery, this milk can be invaluable.  Sometimes these mothers are unable to produce sufficient milk for their own babies and this is where the donor milk bank can help.

“The milk we receive from our donors ensures that those babies who need breast milk most can receive it. This new facility at the Southern General Maternity offers us more space and the ability to extend our existing service to facilitate Scotland-wide access to donor breast milk.

“We have always tried to accommodate any neighbouring health board requests for donor milk to help those most vulnerable infants, but now all parents can be assured that the new single site milk bank will provide donor milk to all babies across Scotland who require it.”

Chief Executive of Yorkhill Children’s Charity Shona Cardle said: "We are delighted to support this much needed expansion and relocation to the Southern General Maternity.  This service has already proven very worthwhile, not only for babies and their families but also for medical staff, and that is why we have invested £192,500 towards it to allow the expansion of the donor milk bank to meet growing demand.  We are extremely grateful to the kindness and generosity of our donors for their overwhelming support which has enabled us to provide the necessary funds to support the donor milk bank.”

One of the babies who has benefited from donor milk is AJ Bain aged 17 months, from Lennoxtown.  AJ was born prematurely at the Southern General Maternity at 24 weeks and developed a serious inflammatory disease of the bowel which can affect premature infants.  He was transferred to the Royal Hospital for Sick Children at Yorkhill and received donor breast milk for several weeks.  He is now a very happy toddler who is progressing well.

His mum Lorraine, who is midwife at the Southern General Maternity Hospital, said:  “Because of AJ’s extreme prematurity and as I’d had previous breast surgery, I did find it very difficult to provide enough milk for him and yet I knew this was the best option.  I was very grateful for the donor milk bank service.  It is a comfort to know that you are doing the best thing for your baby and giving them the best opportunity to develop.”

Yorkhill Children’s Charity provides and supports excellence in paediatric, obstetric and neonatal healthcare enhancing the treatment, care and wellbeing of children and their families through The Royal Hospital for Sick Children at Yorkhill and other hospital and community based services both nationally and internationally.

The Scottish Emergency Rider Volunteer Service (Scots ERVS) is a registered charity which provides a free service transporting donor breast milk, tissue samples and specialist neonatal feeds amongst others.  It has supported the donor milk bank since 2011 collecting milk from donor’s homes and transporting milk to all neonatal units across Scotland.