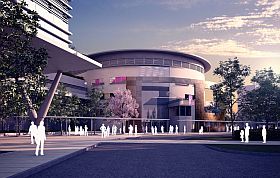 Work on Glasgow’s New South Glasgow Hospital’s Campus took a significant step forward today with the completion of the structural frame of the new adult and children’s hospitals.

Cabinet Secretary for Health and Wellbeing, Alex Neil, marked the milestone by performing a ‘topping out’ ceremony on the top floor of the new adult hospital.

When completed in early 2015 the £842 million publicly funded ‘super campus’ will deliver a truly gold standard of healthcare on the Govan site with maternity, children’s and adult acute hospital and laboratory services all together on one site for the first time in Glasgow.

The new adult hospital sits alongside the new children’s hospital and both will be linked via a subterranean tunnel to the new £90million laboratory which is already operational having opened last year.

The project - which is the largest single NHS hospital building project ever undertaken in Scotland – is on track to be delivered on time and on budget at the beginning of 2015 by contractor Brookfield Multiplex.

Cabinet Secretary for Health and Wellbeing, Alex Neil, said: “This hospital ‘super site’ is the largest healthcare building project ever to take place in Scotland.

“The new adult and children’s hospitals will provide the very best locations and state-of-the-art equipment for both staff and patients across the West of Scotland.

“Investing in our NHS estate also has significant benefits for our economy - over 460 jobs have been created as part of the project, including 95 apprenticeships.

“The project is on time and on budget, and by funding it entirely through public finance, we are ensuring it is deliverable, sustainable and represents best value for money for the taxpayer.”

NHS Greater Glasgow and Clyde Chief Executive, Robert Calderwood, said: “Today’s topping out ceremony takes us to the final stages of a journey which started back in 2001 and is a truly momentous occasion. The full project will see us deliver a programme of investment of almost £2 billion in modernising our healthcare accommodation across acute, mental health and primary community care.

“Not since the Victorian era have the people of Glasgow been presented with such a level of investment resulting in an array of brand new healthcare buildings designed to ensure the advancement of medicine and provide the highest possible quality of patient care.

“The completion of the New South Glasgow Hospitals Project, as the final piece in the jigsaw of our modernisation strategy, provides us with a once in a generation opportunity to embrace new and enhanced ways of working which will deliver huge patient benefits.”

Brookfield Multiplex Project Director, Mike Sharples, said: “We are very pleased with the entire project. From our involvement right at the earliest stages we have worked closely with NHS Greater Glasgow and Clyde and healthcare professionals to deliver Scotland’s largest ever hospital .

“This milestone provides a great illustration of what can be achieved and delivered in Scotland for the benefit of NHS staff, patients and visitors. We look forward to continuing our work on the New South Glasgow Hospitals and delivering a world class facility in 2015.”

The project has also made excellent progress against the community benefit targets which were central to NHSGGC’s plans for the build.

Entering the final phase of project many of its training and recruitment targets have already been achieved and exceeded ahead of schedule. 463 new jobs have already been created of which 339 have been filled with new entrants smashing through the original target of 250. This includes 95 apprenticeships against a target of 88.

196 work experience placements have also been provided against a target of 184 and further opportunities are being planned in conjunction with local schools, colleges and universities.

Notes to Editors
Images of the topping out ceremony are available on request together with current site images and artist impressions of how the new campus will look
upon completion in 2015.

• The new campus will have the biggest critical care complex and one of the biggest emergency departments in Scotland.

• The new adult hospital sits alongside the new children’s hospital and both will be linked via a subterranean tunnel to the new £90million laboratory which is already operational having opened last year.

• Every patient in the general wards of the new adult hospital will have their own single en-suite room with views either across the campus or of Glasgow and to the hills beyond.

• Some 10,000 NHS staff will be based on the campus when it is fully operational

Construction of the new campus will use:

• 2.5 million metres of cabling and wiring

• Hot and cold water pipes which would stretch 190 miles