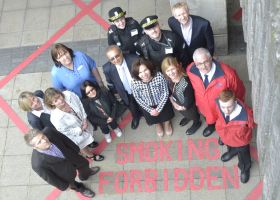 NHS Greater Glasgow and Clyde (NHSGGC) has today unveiled rebranded hospital entrances with bright red obtrusive ground hatchings and giant posters creating no smoking zones which will be hard for smokers to ignore.

Smokefree wardens are also being phased in on our sites where they will patrol the grounds to reinforce the zero tolerance message when people are seen breaching our no smoking policy.

Sheila Duffy, Chief Executive of ASH Scotland, said: “This campaign sends a clear message that tobacco and tobacco smoke are unwelcome substances on health premises because of the damage they do to people. We need to work hard in Scotland  to protect the next generation from this lethal, addictive substance which has claimed so many lives and which undermines people's health.

“We also need to support smokers to quit tobacco where possible, and if not then to reduce the harm to themselves and those around them as much as possible.”

Dr Linda de Caestecker, NHSGGC Director of Public Health, said: “Our staff, patients and visitors are rightly fed up with having to ‘run the gauntlet’ of getting through plumes of smoke when entering our hospital sites. In fact on the Glasgow RoyaI Infirmary (GRI) site staff even submitted a petition calling for more to be done to stop people smoking on our grounds. In response we have launched this ambitious campaign with the very clear and simple message that smoking on our grounds and at our entrances simply will not be tolerated.

“Our hospital wards are filled with people suffering from smoking related disease and our zero tolerance approach is essential in improving the health and wellbeing of the population we serve – providing a healthy and safe environment for our patients, visitors and staff. We are also able to provide very effective support to people to help them to stop smoking through our excellent stop smoking services.”

GRI is the first hospital to have its entrance rebranded and over the coming weeks the roll out of these zones will be completed at all 10 of our other main acute hospital sites.

Plans for our message to go viral are also in train after Clyde 1 DJ, Robin Galloway, starred in an on-line video approaching smokers on our sites with a megaphone leaving them in no doubt that smoking will not be tolerated on our sites.

We have also teamed up with Glasgow City Council who will be sending Community Enforcement Officers to monitor our hospital sites for people littering the grounds with cigarette ends.

Marion Summers of Glasgow Community & Safety Services said: "Discarded cigarette butts are a major source of unsightly litter in Glasgow and cleaning them up costs a vast amount of time and public money. We are happy to support NHS Greater Glasgow and Clyde in their drive to deter smoking outside hospitals.”

Joris Van Der Horst, Consultant Respiratory Physician at GRI, said: “Most of my patients either smoke or have smoked in the past but even they tell me they disagree with smoking right outside the hospital entrance. It’s a sorry sight to see children and pregnant women running the gauntlet of smoke to get into the hospital. We can’t carry on like this - our patients, their relatives and our staff deserve better than that. They have a right to clean air without cigarette fumes - smoking in hospital grounds violates this right which is why I fully support this campaign and can’t wait for it to take effect. Few things in life are free these days - clean air without cigarette fumes should be one of them, at the very least in hospital grounds.”

NHSGGC Board member and former GP, Mustafa Kapasi, is a keen ambassador of the campaign and is passionate about everyone’s right not to have to inhale second hand smoke on healthcare sites. He said: “I fought long and hard on behalf of the BMA for the ban on smoking in public buildings but really what is the point of having a ban on smoking inside the hospital when out at the door smoke is being inhaled on the way in? Non-smokers are in effect being forced into passive smoking and the very last place in the world where this should be happening is on a healthcare site.”

Images of the rebranded entrance at Glasgow Royal Infirmary and wardens on patrol are available for download at: www.nhsggc.org.uk/photodesk

The Robin Galloway video is available to view and share on your own on-line platforms at: www.nhsggc.org.uk/smokefree