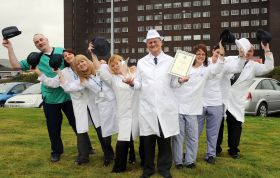 A Catering Manager in charge of revolutionising catering for patients in Scotland’s biggest health board has been crowned this year’s top hospital caterer in the UK.

And all his hard work has been rewarded after being named winner of the national Hospital Caterers Association (HCA) Caterer of the Year award.

Judges commented on the massive challenge Michael faced by “keeping the existing kitchens running while at the same time overseeing the change to two kitchens.”

They also noted that “patient satisfaction” with the quality of their meals had increased.

Michael said: “I had been shortlisted for the award for the last three years and it was quite a shock to hear my name announced!

“It was challenging to get both up and running and I’m very lucky to have a good senior team and staff members around me.

“Thanks to them and the catering staff across both sites I believe that we have the best hospital kitchens in the UK.

“I’ve always believed that food is part of a patient’s treatment and we work closely with local catering managers to ensure that patients’ nutritional needs are being met.”

It takes around three hours for a meal to be made, from the time the raw ingredients arrive to the finished product.

They are then frozen in huge industrial blast freezers which will each freeze 568 kilograms of food, a process which preserves the freshness and taste.

The meals are delivered to 36 individual hospital sites where the food is reheated in hi-tech mobile ovens.

Mary Anne Kane, NHSGGC’s General Manager, Facilities, said: “Michael and his staff worked extremely hard under challenging conditions to make sure that patients received their meals as usual, meanwhile behind the scenes he oversaw this massive shake-up of catering services within NHS Greater Glasgow and Clyde.

“I am delighted that his achievement has been recognised by being awarded one the UK’s top catering prizes.”