Patient Get the Right Seat 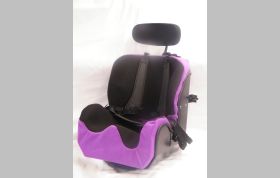 A pioneering team at Glasgow’s Southern General have had their amazing work recognised by the Healthcare Science Community.

The bioengineering team at the South General’s Westmarc have developed in-house a bespoke contoured seat for people with a severe postural deformity. Thanks to their work over 100 patients from across Scotland are sitting more comfortably.

And the team’s hard work in designing the seats have paid off after winning first prize in the national "Healthcare Science Award 2012 - for Innovation in Quality Improvement.

The special seats are designed to match the shape of the patient and promote good posture, and as well as the health benefits, there has been a reduction in waiting times and the cost of supplying these highly specialised seats, which were previously supplied by commercial contractors.

Richard Eadie from Clackmannanshire is 32 years old and has had Cerebral Palsy since birth. Richard has had now been issued with his own bespoke seat and his mum, Sonia, is delighted.

She said: “It has been a challenge over the years to get Richard suitable seating. The new contoured seat from Westmarc is a big improvement and Richard’s position and comfort is now so much better.”

Dr Peter Greene, Principal Bioengineer, Westmarc, said: “The bioengineering team looked at whether it was possible to develop a contour seat in-house that would cater for patients with a postural deformity. After some work the team were able to produce a design that we could supply to patients and we are delighted that patients are now reaping the benefits of the work of the team.

“By producing these specialised seats in-house we have managed to improve the speed of providing appropriate seating to patients with complex postural problems and reduce the costs to the NHS.

“Waiting times have been reduced by 50% and patients are now being seen and supplied with an appropriate seat within the 18 week guarantee. The cost has also been reduced by 60%, a significant saving for the NHS.

“We are also delighted that the team have had their work recognised by the Healthcare Science Community and been awarded first prize in the national "Healthcare Science Award 2012 - for Innovation in Quality Improvement. This is a great achievement.”

John Colvin, Head of Service, Westmarc added: “This is a fantastic development for the team which benefits the patients who require one of these specially designed seats.

“The majority of the patients who require a bespoke seat have severe deformities which makes sitting in a normal seat virtually impossible. By providing patients, whether it be a child or an adult, with something which gives them support and promotes better posture really does make a difference to their lives.”

Notes to Editors
Westmarc provides wheelchairs and specialist equipment to people of all ages who have a long term disability that affects their mobility.

Westmarc is a department within NHS Greater Glasgow and Clyde who provide services to people from across the West of Scotland.