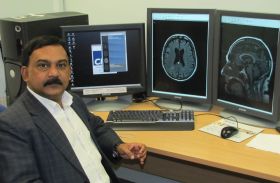 Researchers in Glasgow are leading on a new ground breaking trial which could revolutionize the way we diagnose and treat stroke within the next five years.

Southern General neuroradiologist Dr Celestine Santosh and the team at the hospital’s neuro radiology department, department of clinical physics and the University of Glasgow are working on developing new technologies to help diagnose and treat stroke more effectively and within wider time frames using oxygen, perflourocarbon (PFC) as an efficient oxygen carrier, and MRI scans.

The aim of management in acute stroke is to identify and treat the “penumbra”.  The penumbra consists of the viable tissues that surround the dead area in the brain after stroke which would also die if not treated

Dr Santosh explained:  “Currently every clinician is treating acute stroke with clot buster drugs while always watching the clock as this treatment is only licensed for use up to 4.5 hours after stroke.

“This obviously has major limitations as one third of all stroke patients don’t know the time of their onset of symptoms.  However, research shows that the penumbra can stay viable up to 48 hours after a stroke so it gives us more, much needed, valuable time to treat the patient.

“Therefore accurately identifying the penumbra is really the Holy Grail in stroke.  The Glasgow team has developed a novel technique called Glasgow Oxygen Level Dependent (GOLD) which uses an MRI scanner, PFC and oxygen to identify this penumbra.  Furthermore by efficiently delivering oxygen with the PFC to the tissue that has been starved of oxygen, it also offers neuro protection.  GOLD uniquely combines both therapeutic and diagnostic capabilities and so is uniquely theranostic and could make a real difference to stroke patients.”

As part of the ongoing work before starting the first human stroke trials in Glasgow in 2015, Dr Santosh and his team are working with an American company using their PFC “oxygen carrier” which has already undergone human phase 1 trials.

Dr Santosh explained:  “This is the newest thing on the horizon for stroke care and it has been achieved within a relatively small budget.  We are very proud this is an NHS project, led by the NHS and funded through numerous awards and grants including support from Scottish Health Innovations Limited (SHIL) and recently acknowledged by Scottish Enterprise.  I have had a lot of support from NHS colleagues, in particular physicist Dr David Brennan, with whom I was recently awarded the Scottish Life Sciences Award 2013 for the Best Innovation Originating within NHSScotland.

“We realise this is a unique project which has the possibility to change the way we diagnose and treat stroke.  It is a giant step forward in stroke treatment and is simply a no brainer for research; we need to look at giving oxygen to viable tissue so that time is no longer the surrogate marker.  If it works here, there are also other conditions we can begin to look at using this treatment for including cardiac and cancer.”