Time to Pull Yourself Free From Smoking 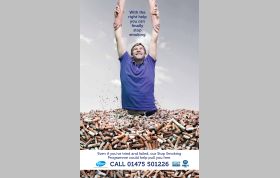 Smokers in Inverclyde are being encouraged to give up smoking as a new stop smoking campaign hits the streets of Greenock and Port Glasgow.

The campaign is highlighting that ‘with the right help it is possible to finally stop smoking’ and is supported with a massive billboard, bus stop posters, posters in local pubs and a comprehensive leaflet drop throughout Greenock and Port Glasgow.

This project will offer local people the opportunity to quit and has been developed in partnership with NHS Greater Glasgow and Clyde’s smoke free services, Inverclyde Community Health and Care Partnership (CHCP) and with support from Pfizer Limited.

Cecilia Conway has already quit with the help of the stop smoking programme. 54 year old Cecilia had been smoking since she was 12 as at the time ‘everyone was doing it’. She joined one of the groups last August as her breathing was giving her cause for concern and has been smoke free since then.

Cecilia who is married with two teenage boys smoked between 12 and 14 cigarettes a day and having given up is feeling the benefit both with her health and financially. She said: “I started smoking when I was 12 years old because everyone else was doing it and I continued to smoke for 42 years.

“However, I was finding my breathing was difficult and decided it was time to quit. I joined one of the stop smoking groups and haven’t had a cigarette since.

“Not only has my health improved but I am seeing the financial benefits as well and with two teenage boys that makes a big difference.”

Liz Grant from NHSGGC smoke free services said: “With such a visible campaign across Greenock we are hoping it will encourage smokers to seek the support they need.

“A lot of people try to give up smoking, particularly at this time of year, and while some succeed, many don’t.

“With the right help your chances of success and quitting for good are increased so we would encourage anyone thinking of giving up to give our stop smoking programme a go.”

Frances Bryce, Smokefree Services added: “By attending our stop smoking programme, you are four times more likely to successfully stop smoking than if you tried on your own without support. We offer specialist support in a friendly environment, so why not give us a ring on 01475 501226?”

Notes to Editors
Smoking was responsible for 13,321 deaths in Scotland in 2008. This is around a quarter of all deaths, with men and women who die in middle age losing on average 22 years of healthy life.

Quitting can also help tackle the effects of the credit crunch, eg stopping for one day is equal to renting a movie; a week can add up to the equivalent of a cheap flight abroad, and not buying cigarettes for a year could pay for either a second-hand car or the beginning of a deposit for a home.