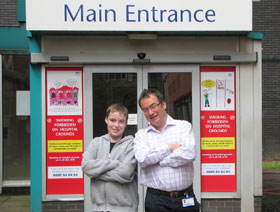 A pilot scheme which saw no smoking wardens patrolling all of NHS Greater Glasgow and Clyde’s main hospital sites has been so successful that it has been extended into 2014.

The health board’s zero tolerance crack-down on smoking on hospital grounds was launched in May and saw rebranded hospital entrances at 11 sites with bright red obtrusive ground hatchings and giant posters creating impossible to ignore no smoking zones backed-up up by wardens to reinforce the no smoking stance.

The impact of the “Smoking on Hospital Grounds – We’re Sick of It” campaign after just five months have been overwhelming with an unprecedented t 56 per cent reduction in the number of smokers lighting up at hospital entrances being recorded to date.

Before the launch of the campaign the single most complained about issue to the Health Board was smoking on hospital grounds. However in the past five months the number of complaints from visitors, patients and staff angry about smokers polluting hospital entrances has been slashed by 18 per cent.

Minister for Public Health, Michael Matheson, said: “I am delighted that NHS Greater Glasgow and Clyde’s campaign to discourage people smoking outside their hospitals has been a success. And that the Board has decided to continue using smoking wardens on some of their larger sites to discourage smokers until next year.
“Scotland has set an ambitious target to become smoke free by 2034. And we are taking forward a range of measures to achieve this including bringing forward legislation on standardised packaging, investing in prevention and cessation programmes as well as looking specifically at discouraging young people from smoking and maintaining pressure on the price of tobacco.

“Smoking is extremely harmful to health – each year, tobacco use is associated with over 13,000 deaths and 56,000 hospital admissions in Scotland. We are committed to tackling this by reducing the number of people smoking and reducing exposure to second hand smoke.

“Scotland’s health service should be an exemplar in providing smoke-free environments, that is why we have set a target for smoke-free hospital grounds by 2015.”

Despite the unprecedented success of the campaign so far, the smokefree wardens are still encountering resistance from a hard-core of smokers who refuse to adhere to the policy however the health board is determined to continue with its drive to make hospital grounds in Greater Glasgow and Clyde smoke free by 2015.

Fiona Dunlop, NHSGGC’s Health Improvement Lead for Smokefree Services, said: “The impact of this campaign has been fantastic but there is still a long way to go to persuade everyone to respect our smokefree hospital grounds policy.

“The buy-in from the vast majority of staff, patients and visitors alike has been central to the success so far. To have achieved a reduction of 56 per cent in smokers lighting up at entrances in five months is something we are very proud of.

“Nonetheless, we still have a hard-core of smokers who ignore our signs and wardens and refuse to adhere to the policy and that is why we have decided to extend the presence of the wardens on our biggest sites. We are keen to keep build on the momentum that has already gathered significant pace which is why the wardens have now been extended to March next year.”

Since its launch the campaign has received cross party political support and the backing of no smoking groups.

ASH Scotland Chief Executive, Sheila Duffy, said: “It’s welcome news that the wardens employed by NHS Greater Glasgow & Clyde have had a marked impact on reducing the number of people smoking in hospital grounds and the volume of complaints about the problem.

“The drop of over 50% in smokers around hospital entrances shows how effective it is to have wardens on hand to give advice and support about quitting tobacco as well as to remind people of the policy over smoke-free grounds.

“We’re delighted the initiative is being extended into next year as it is part of a vital national drive to reduce the harms from tobacco and to put smoking out of fashion for the next generation.”