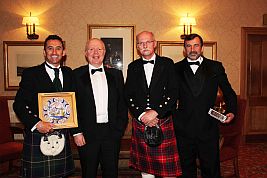 A special motion tabled by Linda Fabiani MSP asked Parliament to join her in recognising the work of the West of Scotland Regional Maxillofacial Service and in congratulating Michael O’Neil, one of the Unit’s technologists who recently won the prestigious ‘Wim de Ruiter Deft Plate Award’.

The Unit provides specialist treatment for patients who have a head or neck disfigurement including facial prosthetic and custom made Titanium skull plates for those who have suffered head trauma.

Michael O’Neil won his award for research he undertook as part of a post graduate degree whilst another member of the team, George Payne, also scooped the coveted ‘Mount Vernon Award’ for outstanding clinical or technical practice.

Robert Calderwood, Chief Executive NHS Greater Glasgow and Clyde said:  “I am delighted that the work of the maxillofacial prosthetics team has been recognised by Scottish Parliament in this way.

“I would personally like to express my congratulations to both Michael and George for their achievements.”

Minister for Public Health Michael Matheson said: “I am glad to see the achievements of these two members of our NHS being recognised in the Scottish Parliament. Both Michael and George have shown outstanding commitment to developing the field of maxillofacial prosthetics and ensuring that Scottish patients benefit from the latest technical advances.

“Their achievements are truly commendable and receiving these awards is a real credit to the West of Scotland Regional Maxillofacial Prosthetics Service. These awards also reflect the importance of such research, and the wider pioneering work in this field that is taking place across the NHS in Scotland – something of which we can all be proud.”


The service provides maxillofacial prosthetics for patients across the West of Scotland andthe Forth Valley area and the team, which consists of eight Maxillofacial Prosthetists, is  based between the Southern General Hospital Glasgow and the Glasgow Royal infirmary.

There is a wide and varied range of work carried out within the service which can range from simple surgical plates used to aid heeling, to re-contouring of a patient’s skull after trauma using a custom fabricated Titanium cranial implant (skull plate).

The laboratory runs prosthetic clinics and fabricates custom made noses, ears, indwelling eyes and orbital prosthesis for patients who have lost part of their facial contour through trauma, cancer or congenital deformity.  These prostheses can be retained by adhesive or by state of the art Titanium surgical implants which are placed in the skull bone.