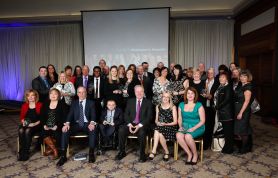 An NHS Nurse and a volunteer who have both managed to battle through personal illness while also going over and above for patients have been recognised in NHS Greater Glasgow and Clyde Chairman’s 2013 Awards.

Staff Nurse Karina Bowie and volunteer John O’Byrne were among 16 individuals and teams to receive awards in this year’s prestigious event, held at the Thistle Hotel in Glasgow as part of NHS Greater Glasgow and Clyde’s Annual Review.

The worthy winners, across six categories, “represent the ethos of NHS care, quality and dedication” and were presented with their awards by Cabinet Secretary for Health and Wellbeing, Alex Neil.

The awards recognise some of the most hardworking and dedicated staff from the UK’s largest health board, honouring those who have gone that extra mile to make a special difference to the lives of patients and their families as well as services which have been specifically designed to make life easier and better for patients.

Dykebar Hospital nurse Karina (28) from Paisley was nominated by a fellow colleague for showing dedication, kindness and compassion for her patients after battling a serious illness which left her wheelchair-bound.

Karina began her nursing career at 17 working with older patients. After securing a full-time role caring for older mental health patients she thought she may have to give up her career when she became seriously ill. However, through sheer determination and hard work Karina managed to defeat her illness and has returned to nursing again.

On finding out she had won this award, Karina said: “It is so surreal and amazing to win. Although my job is both physically and mentally demanding as soon as you make one patient smile your day is made.”

Volunteer John O’Byrne (34), from Mosspark in Glasgow, has also been recognised for his dedication to the Royal Hospital for Sick Children. Having spent much of his childhood as a patient in the hospital John decided he wanted to give back to the service which had helped him so much as a child.

Six years ago John decided to become a volunteer at the hospital. He carries out work in both the Medicinema and in the Schiehallion Ward and despite his ongoing medical condition John is known for being extremely kind, caring, committed and witty.

On learning that he had won this award, John said: “I am absolutely delighted. I love my job and everyone is very supportive of me and my work. It is great to be given the opportunity to help patients, their families and staff and I feel very honoured that my work has been recognised.”

Cabinet Secretary for Health and Wellbeing, Alex Neil, said: “I am delighted to be here today to present these awards, and all of those who are here today are deserving winners.

“The people who have been singled out are those who have gone the extra mile, and gone above and beyond the call of duty to provide the best possible care to patients. It is inspiring to hear their personal stories, and I know that these examples are replicated in the NHS right across Scotland.

“These awards have continued to go from strength to strength and I am personally delighted to be here to honour the achievements of the category winners.”


Other NHS Greater Glasgow and Clyde Chairman’s Award winners include:
• a team of specialist radiographers at the Beatson for developing new techniques which cut a patient’s need for radiotherapy treatments from 25 to five,
• a diabetes specialist nurse who was nominated by a patient who said: “She saved my life.”
• a domestic services team from Glasgow Royal Infirmary who worked far beyond their scheduled hours when a winter emergency required it,
• the energy team for helping to reduce the organisation’s carbon footprint and managing to identify more than £170,000 by encouraging colleagues to be more energy efficient ,
• a dedicated team from Ward 45 (Burns ward) at Glasgow Royal Infirmary for making each patient feel special – from making scrambled eggs for one who was unable to eat to taking patients out into the sunshine to cheer them up,
• a truly inspirational team from Ward 24 at the Southern General Hospital for the fantastic care they provide for each and every patient.

NHS Greater Glasgow and Clyde Chairman, Andrew Robertson, said: “These awards present an opportunity to celebrate and recognise NHS staff who go just that little bit further to deliver first class service to patients or to support the services that keep the wheels of NHSGGC turning smoothly.

To be nominated is an achievement in itself – and this year 156 individuals or teams of staff were nominated which says a huge amount about the depth of dedication and professionalism among our staff.

“For the 16 winners who were selected by me and my team of judges it is truly something of the very highest recognition and today I am proud and honoured to congratulate each and every one.”

The Chairman’s Awards are sponsored by Scottish Health Innovations Limited (SHIL) who work to develop new innovations from healthcare professionals.

Keith McKellar, SHIL Chief Executive, was part of this year’s judging panel. He said: “At SHIL we are delighted to be sponsoring the Chairman’s awards again this year. These awards are a splendid way to recognise the commitment of staff and volunteers alike and we at SHIL would like to wish them our sincere congratulations and express our grateful appreciation in being able to participate.”

Notes to Editors
Pic:  The 2013 NHS Greater Glasgow and Clyde Chairman’s Award winners are photographed with the Chairman Andrew Robertson and the Cabinet Secretary for Health and Wellbeing, Alex Neil

*more photographs of the award winners being presented with their awards by Cabinet Secretary for Health, Alex Neil will be available from the press office

Full list of Chairman’s Award winners announced at a special ceremony as part of the NHSGGC annual review: