YOUNG SCOTS ARE WORLD AND UK CHAMPIONS AT TRANSPLANT GAMES 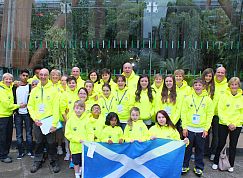 Three young Scots who have all had kidney transplants have returned from the World Transplant Games in South Africa with a host of medals.

The athletes took part in the Games in South Africa this summer and managed to win seven medals between them – four Gold, one Silver and two Bronze.

Sam Pooley (14 years old) from Dunbar won two Gold and one Silver for athletics. Rory MacRae (18 years old) from Bridge of Allan won a Bronze medal for table tennis and Zoe Buchanan (17 years old) from Shetland won two Gold, one Bronze for badminton and also received a trophy for special achievement. Sam, Rory and Zoe were up against more than 2000 other athletes from across the world

All three underwent their transplants at the Royal Hospital for Sick Children in Glasgow and continue to be to be seen and supported by the Renal Unit at the hospital.  Sam underwent his kidney transplant in June 2003, Rory in 2012 and Zoe in 2010.

Following on from the World Games’ successes nine more youngsters including Zoe and Sam went on to compete in 2013’s British Transplant Games between 12 and 19 August in Sheffield. The Scottish team were hugely successful and won six gold, two silver and three bronze medals.

The Sheffield trip was part-funded by the charity Kidney Kids and donations were also gratefully received from local businesses and family and friends.

Transplant co-ordinator at Glasgow’s Royal Hospital for Sick Children Diane King is part of the Renal Team who helps make sure the young people continue to stay healthy and is extremely proud of how well all of the youngsters have done. She said:  “These youngsters are just amazing. Not only did three of our young people manage to compete and win in the World Games but another seven youngsters took part – many for the first time - in the UK Games and again have managed to win a host of medals.

“These young people have had to overcome so much in their lives – with many still having on-going health conditions, but they are still absolutely determined to improve their fitness and take on new sporting challenges.

“We are delighted that these remarkable youngsters have done so well, we are all so proud of them.”