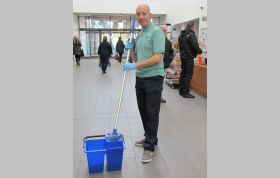 A successful trial at the New Stobhill hospital has seen staff join the Weigh in @ Work initiative giving them the opportunity to take learn more about weight loss and weight management in their breaks.

They have also taken the opportunity to ask questions about other health improvement issues such as nutrition, physical activity, smoking cessation and family health.

Stobhills Patient Information Centre (PiC) officer Denise Hazley explained: We decided a drop in style approach was the best option for staff, so it was easy for them to come along during lunch and tea breaks. It was an opportunity for staff who would not normally engage in health improvement or lifestyle change sessions to drop in.

"We decided to take a very broad, holistic approach so as well as discussing weight maintenance and nutrition. We also discussed other health issues such as cancer awareness and smoking."

One of the first members of staff to sign up to the pilot at Stobhill was domestic Cliff Brace.

Cliff who celebrated his 50th birthday last year was happy to take on some workplace weight and management advice.

Cliff said: It was mainly age and my weight had crept up partly because of a shoulder injury. The weekly sessions are advisory, nobody tells you to stick to a programme so there was no pressure at all.

"I lost around 11lbs mainly be cutting down portion sizes and being weighted every week helped me keep an eye on how I was doing."

The project is now rolling out to other areas in NHS Greater Glasgow and Clyde such as the New Victoria, the Southern General Laboratories and the Royal Alexandra Hospital in Paisley.