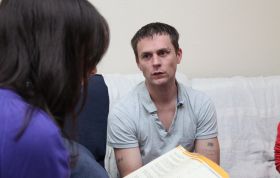 A new speedy sexual health testing service for gay and bisexual men has been launched by NHS Greater Glasgow and Clyde’s Sandyford service in partnership with Gay Men’s Health.

The service provides quick HIV test results to gay and bisexual men who can also get tested for HIV, syphilis, gonorrhoea, chlamydia and hepatitis B.

Using a fast-test finger prick technique, results from an HIV and syphilis test can be generated within 20 minutes, and the remaining picked up at a later date.

It is this fast turn-around which NHSGGC sexual health improvement officer Nicky Coia thinks is one of the main benefit of the service.

Nicky explained: "HIV is the STI that people really worry about so the fact they can get that results really quickly is important. We wanted to open up choice to men who might find it more difficult of go through the process of booking an appointment and having to wait for test results.

"The biggest barrier for gay and bisexual men in regards to testing for HIV is the fear of a positive result. So anything we can do to reduce that level of fear is really important."

According to Health Protection Scotland, there are an estimated 4315 people who are HIV positive living in Scotland. During the first nine months of 2012, there were 260 new HIV positive results.

Unprotected sex among men who have sex with men is the main route through which new HIV infections are acquired in Scotland.

In 2011, for the first time in over ten years, the number of new reports among men who have sex with men, exceeds those made in individuals for whom heterosexual intercourse was the main route of transmission.

Providing a tailored service to this group, Nicky is hopeful that the non-clinical setting at Gay Men’s health will help normalise the notion of regular testing.

"Gay Men’s Health is a trusted organisation among gay men," said Nicky. "They have a reputation of being completely in tune with gay men’s sexual health needs.

"It is a walk in service in the evening so it means people who are out and about in the Merchant City can just walk in.

"With this new service and also the Terrence Higgins Trust (THT) community testing which recently launched, both models make sure that people have a clear pathway to NHS services that are already in place.

"So anyone who is diagnosed at THT or Gay Men’s Health will be immediately referred into appropriate NHS services for follow up treatment and care.

Chief Executive of Gay Men’s Health Bruce Fraser said: "The problem at present is that a lot of the transmission is through men who don’t know that they are HIV positive because they have not been diagnosed.

"So if we can get more men tested and more men on treatment, we can reduce the level of HIV in the community as well."

The clinic runs from 4.30pm to 7.30pm every Thursday at the Gay Men’s Health Glasgow office in 30 Bell Street, Merchant City Glasgow with Sandyford sexual health nurses leading the service. Initially it is a walk-in service with no appointment needed.