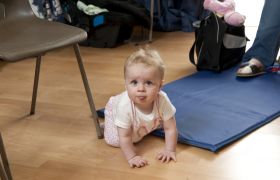 Doctors at the Royal Hospital for Sick Children in Glasgow (RHSC) have launched a campaign to warn parents of the dangers of liquitabs used in dishwashers and washing machines after a number of children have suffered serious injury after biting into them by mistaking them for jelly sweets.

Five children, all under the age of two, have been admitted to hospital so far this year.  These incidences could have had fatal consequences if it had not been for the quick actions of medical staff.

Dr Lyndsay Fraser, from the hospital’s Ear Nose and Throat Department, explained:  “We have known for some time about the risk of eye injuries from kids squeezing these liquitabs until they burst.  What we have seen more recently is that children are biting into the tablets, presumably because they think they are sweets as they have the same soft texture and bright colouring.  The alkaline chemicals in the liquitab cause an immediate chemical burn, causing breathing problems as the airway starts to swell rapidly.

“Getting them to hospital straight away is imperative.  In most of the cases seen so far we have had to insert a breathing tube to protect the child’s airway from the swelling and help them breathe.  If these children hadn’t reached A&E on time, the airway could close over completely with potentially fatal consequences.”

Once the breathing tube has been inserted, children can be on a ventilator for anything up to two weeks whilst the swelling settles and one child so far has required further surgery to repair the damage caused by the liquitab.

Dr Fraser added:  “It really is only good fortune that we haven’t seen a death resulting from this type of injury.”
Dr Fraser and colleagues at the RHSC have been alarmed by the number of children recently admitted as emergencies to the hospital and have published a letter in the Archives of Diseases in Childhood to alert medical colleagues and parents as to the dangers of liquitabs.

“Liquitabs are attractive to young children due to their bright colouring and soft texture. Toddlers are naturally inquisitive and commonly like to place objects in their mouths.  Most liquitab brands do not come packaged in child proof containers so it is easy to access to them especially if they are left within reach and sight of young children or toddlers,” explained Dr Fraser.

She continued:  “Most parents are not aware of the dangers of these common household items, commonly storing them in unlocked cupboards within potential reach of their child.
“It is important parents realise that these liquid capsules are dangerous chemicals and they should be kept locked away so children can’t reach them.  They must be stored safely at all times, out of reach and sight of young children. Wherever possible and as with all household cleaning products and bleaches they should be stored in a locked cupboard or in a cupboard that cannot be accessed by children.”

One parent who realised firsthand the dangers of liquitabs is Shannon Hutchison who ended up calling an ambulance to take daughter Orla, aged seven months, to A&E at the RHSC after ingesting the contents of a liquitab.

Shannon explained:  “Orla was at my sister’s house playing with my two year old nephew who managed to get hold of hold of one of these liquitabs.  He thought it was a sweetie because it was bright and like a jelly so he gave it to Orla who bit into it.

“Immediately we realised there was a problem as she was going in and out of consciousness so phoned an ambulance right away, it was terrifying.  I’m just so lucky to still have my little girl.”

Orla was rushed to intensive care and spent ten days in hospital.  Since the incident, Shannon says she’s much more careful about where all her family are keeping liquitabs.  “To kids they do look like bright sweeties and they are not in a sealed box, kids can get into them so easily and I had no idea what could happen until I saw what happened to Orla.

“When we got to hospital the doctors told me they see this two or three a year.  Now I make sure that all the liquitabs are locked away and I tell everyone to do the same.  The boxes they come in really should be child proof and I hope manufacturers do something about this as I wouldn’t want this to happen to any other little girl or boy.”

Advice to parents/ carers:
Ensure Liquitab products are stored safely at all times, out of reach and sight of young children. Wherever possible and as with all household cleaning products / bleaches etc, they should be stored in a locked cupboard or in a cupboard that cannot be accessed by children.

If children have access to an area that contains any household cleaning items, they should be supervised at all times.

Parents / carers should take a child to their nearest A&E department if they suspect their child has swallowed a liquitab. If possible they should also take the bottle/ packaging to A&E with them.

The child should not be given anything to eat or drink and should not be encouraged to be sick. However if the child is sick, they should be assisted to prevent choking.

There are many other items eg perfume, aftershave or toiletries, alcohol and medicines that can be poisonous and in order to prevent injuries, care should be taken around the home with these.

Children's access to a kitchen area can be prevented by the use of a gate across the doorway.